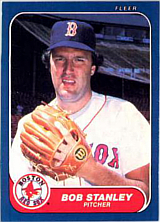 It was Bob Stanley that uncorked the wild pitch in Game 6 of the 1986 World Series, enabling Kevin Mitchell to score the tying run for the New York Mets and prolong the game for Mookie Wilson and Bill Buckner's date with destiny, cementing an epic collapse for the Boston Red Sox. Ironically, Stanley had remarked earlier that season "They may boo me now, but they'll love me when I'm standing on the mound when we win the World Series."

Stanley spent his entire big league career (1977 to 1989) in Boston. He remains the Sox's all-time leader in appearances, with 637. He made two All-Star teams, becoming the first (and to date only) player born in Maine to be so honored. In 2000, he was inducted into the Red Sox Hall of Fame.