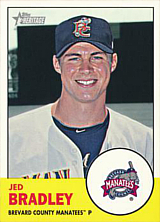 Jed Bradley was a first-round draft pick in the 2011 amateur draft. He made six big league appearances in 2016.

Bradley had a 0.91 ERA as a junior in high school at Eisenhower High School. Moving to Huntsville (AL) High School his senior season, his ERA rose to 1.79 but he struck out 59 in 39 innings. As a college freshman at Georgia Tech, Bradley struggled at 2-3, 6.65, though he continued to show good strikeout totals (49 in 44 2/3 innings). His sophomore season, he improved to 9-5, 4.83 and struck out 99 in 91 1/3 innings. He was second in the ACC in K/9 ratio and tied Brandon Cumpton and Deck McGuire for the Georgia Tech lead in wins. He dazzled in the Cape Cod League, going 2-3 with a 1.98 ERA, 44 strikeouts, 33 hits and 6 walks in 41 innings for the Wareham Gatemen. Baseball America named him the #4 prospect in the CCL, after Anthony Ranaudo, George Springer and Matt Barnes. Bradley continued to improve, with a 7-3, 3.49 campaign in 2011. He was second-team All-ACC and struck out 106 in 98 innings. The Milwaukee Brewers picked him 15th overall in the 2011 amateur draft; the choice was compensation for failure to sign Dylan Covey in 2010. He was the second college pitcher Milwaukee took, as they had selected Taylor Jungmann with the 12th pick of the draft. Jed signed for $2 million; the scout was Ryan Robinson.

Bradley made his pro debut with the Peoria Javelinas of the 2011 Arizona Fall League, posting a 6.48 ERA. He made his minor league debut with the Brevard County Manatees on April 7, beating the Daytona Cubs, 1-0. He allowed three hits and one walk in 6 1/3 innings while fanning 7 to out-duel fellow first-rounder Hayden Simpson. Hiram Burgos relieved him in the 7th. Bradley gradually climbed the rungs of the Brewer ladder, converting to a relief pitcher in 2015 while splitting his time between the Double A Biloxi Shuckers and the Triple A Colorado Springs Sky Sox. During the 2016 season, he was flipped to the Atlanta Braves, where he resumed working as a starter. In September, he got his first big league look and allowed 4 earned runs in 6 appearances (7 innings) while striking out 4. The Braves waived him at season's end, and he wound up in the Baltimore Orioles system before retiring in May 2017. A comeback ensued with the New Britain Bees of the Atlantic League in 2019.