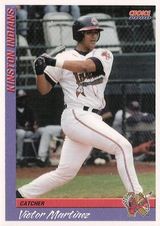 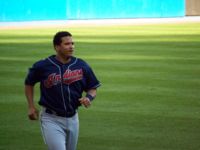 "Are the Sox missing a locker room leader like Victor Martinez during their struggles? He was such a positive voice during the year and a half he was here . . . Tremendous observation . . . I think they do miss it. Victor was very outspoken and became an instant leader. A very effective player on and off the field. Understood the moment." - a question and answer from the Ask Nick mailbag at boston.com, Sept. 26, 2011

A consistent hitter throughout his career until 2015, Victor Martinez was a five-time All-Star and two-time Silver Slugger Award-winning catcher who transitioned into a full-time designated hitter for the Detroit Tigers in his mid-30s. Unusual for a backstop, Martinez was a switch-hitter, who not only hit for high average but also for moderate power, coupled with frequent triple-digit run production. Following an exceptional 32/103/.335 2014 season, in which he led the American League in OBP (.409), OPS (.974), and intentional walks (28), he signed a four-year $68 million dollar contract to remain in Detroit, finishing his career there in 2018.

After missing all of 2012 to a potential career-ending combined torn ACL and microfractures in his knee, Martinez bounced back with terrific seasons, and 12 years into his big league career sported a .306 career batting average. Relieved of the heavy toll of full-time catching, he improved dramatically at the bat from an already high level after moving to playing as a DH full time, posting the best season of his career at 35, before facing the normal age-related decline that left him with a career batting average of .295.

Martinez is one of a dozen major league players who were born in Venezuela in 1978. Others include Endy Chavez and Juan Rivera. Victor was signed as an international free agent by the Cleveland Indians in 1996, and continued to play in his home country until 1999, when he entered the U.S. minors. By 2001, he was hitting .329 with the Kinston Indians, and the following year he improved to .336 with 22 home runs.

That got him a cup of coffee in the majors. Coming up in September 2002, he hit .281 and slugged over .400 but was again in the minors for most of 2003, again hitting over .300. He came back up to the Indians for 49 games, though, and while he didn't show much power, his .289 batting average was impressive enough that he stayed up the following year.

In 2004 he started to show power, with 38 doubles and 23 home runs. That year, he drove in over 100 runs for the first time in his major league career. On July 16th, he had his first three-homer game, against the Seattle Mariners.

"Victor Martinez sat stunned in front of his locker in Cleveland’s clubhouse — for the last time. He squeezed his young son to his chest and wiped tears from both of their faces. . . 'It’s tough because I’m leaving my house,' he said, his voice choked with emotion. 'This was my house. It’s really tough.' " - report of the 2009 Victor Martinez trade at NBC Sports, July 31, 2009

He was traded to the Boston Red Sox in July 2009, and and put up a sharp 8/41/.336 line in just 211 at-bats for his new team during the later part of the season. He had seen post-season action with the Indians in 2007, hitting well, and also appeared in the post-season in 2009 with the Red Sox. 2009 also marked the year when Victor started to play a lot of first base along with catcher. In 2010, though, he was back to playing mostly catcher, with Jason Varitek showing signs of age at catcher, while Kevin Youkilis was solidly entrenched at first base. On June 1st of that year he tied a major league record by hitting four doubles in a game. For the season he went 20/79/.302 in 493 at-bats over 123 games, 110 at catcher, 14 at first, and 4 at DH.

Inexplicably unsigned by the Red Sox, who suffered from a round-robin of middling-at-best catchers in the following seasons, he became a free agent following the 2010 season and signed a four-year, $50 million contract with the Detroit Tigers starting in 2011. Seeking to get a young Alex Avila into the lineup, the Tigers used him primarily at DH, though knee problems prevented Martinez from doing any catching after mid-season that year. He hit very well, however, with an OPS+ of 132, and 40 doubles, 103 RBI and a .330 batting average, joining MVP Miguel Cabrera in an excellent one-two punch in the middle of the line-up that helped lead the Tigers to the division title. He hit a pair of homers in the postseason, but Detroit bowed out in the ALCS.

Before he could follow up on his success on a third AL power, Martinez suffered a torn ACL while training to get ready for the 2012 season. When he underwent an operation in January, it was revealed that the injury was even more serious than thought, as Martinez had suffered microfractures in addition to the torn ligament. That meant that any rehabilitation would only start at the time the season was almost over, causing him to miss the entire year. The Tigers reacted to his injury by signing free agent 1B Prince Fielder to a huge long-term deal, giving indications that they were very concerned about Victor's long-term prospects for recovery.

Indeed, Martinez missed the entire 2012 season, and the Tigers' run to the 2012 World Series, but was back on the field for the start of spring training in 2013, fully recovered. He was expected to be the team's primary DH, taking over for Delmon Young, who had been let go in the off-season. Incredibly, the 34-year-old delivered a full 159-game performance, putting up a very respectable 14/83/.301 line over 139 games at DH and a sprinkling of appearances at both catcher and first base.

There was no doubt his recovery was full when Martinez had by far his best season in 2014. The MVP runner-up posted career highs in homers (32), batting average (.334), slugging (.565), OBP (.409), OPS (.974), OPS+ (168), hits (188), total bases (317), intentional walks (28), and even steals (3), though he was caught twice. He was the American League Player of the Month in August when he batted .350 with 5 doubles and 6 homers, scored 20 runs and drove in 30. However, during off-season workouts in February, he injured his knee and had to undergo surgery, missing the start of spring training in 2015. He was able to start the year with the Tigers, but hit only .216 with a single homer in his first 34 games. On May 19th, he was placed on the disabled list with inflammation in his left knee. Martinez did not want to go on the DL, but other options had failed, such as treating him with anti-inflammatory drugs or giving him extra rest. He missed exactly a month of action and played regularly the rest of the way, but his production was way down. In 120 games, he hit only .245, with 20 doubles, 11 homers and 64 RBIs. His poor season was in the image of the Tigers', as they completely tanked in the second half and finished well off the pace after leading the AL Central in the early going.

Victor was back to pounding the ball in 2016 however, and not coincidentally, the Tigers were back winning as well. On June 16th, he came into a game against the Kansas City Royals hitting .332 with 9 homers and 35 RBIs, and then proceeded to have the second three-homer game of his career, connecting twice off Danny Duffy and once off Chien-Ming Wang to lead Detroit to a 10-4 win. He homered from both sides of the plate in the game. In 154 games that year, he hit .289 with 27 homers and 86 RBIs.

On June 15, 2017, he was hospitalized with an irregular heartbeat after feeling unwell during the 7th inning of that day's game. He underwent testing and stayed for a couple of nights before being released, but was ordered to take a week of rest. He collected his 2,000th career hit three weeks later, on July 7th at Progressive Field, facing his former team the Cleveland Indians. The health problems returned in late August and as a result his season ended on August 26th, when he returned to the disabled list and had to undergo cardiac fibrillation surgery. In 107 games, he hit .255 with 10 homers and 47 RBIs. He returned to play regularly in 2018, although his production was well below that of just a couple of seasons earlier. In mid-August, he announced that he was "pretty sure" he would retire at the end of the season. He confirmed that in September, stating that he would play his last game on September 22nd. He went out by hitting an infield single through a defensive shift in his final at-bat in the 1st inning, not the most characteristic for a hitter of his type, but a nice send-off nonetheless. Manager Ron Gardenhire then replaced him with a pinch-runner.

Through 2014, the most similar players (according to the similarity scores method) were Robinson Cano (888), Chase Utley (886), and Nomar Garciaparra (886). The fact that none of them has a score of even 900 shows that Martinez has been a rather unique player, as few catchers have had his combination of hitting skills.

Over the years, there have also been several minor league ballplayers by the name of Victor Martinez. He is not to be confused with a well-known professional bodybuilder also named Victor Martinez [1].