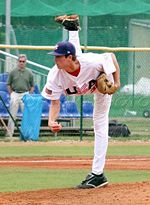 Kyle Gibson was picked in the first round of the 2009 amateur draft.

In high school, Gibson was 15-8 with a 1.19 ERA and hit .439; he made All-State as a senior. As a sophomore and junior in high school, he played ball at the Pittsburgh Pirates training camp in Bradenton, FL, facing off with college-level players. The Philadelphia Phillies took him in the 36th round of the 2006 amateur draft but he opted for college.

As a freshman, Gibson was a reliever on a Missouri team that featured Aaron Crow as its ace starter. Kyle went 8-3 with 7 saves and a 4.12 ERA, striking out 77 in 68 innings over 28 appearances. Crow was the only pitcher on the club with more wins or strikeouts. Kyle was 2-0 with a 1.17 ERA for the Falmouth Commodores of the 2007 Cape Cod League, finishing second to Crow in ERA. Baseball America rated him the #3 prospect in the circuit.

Gibson had a 9-4, 3.84 record with 2 saves in 2008, striking out 96 in 86 2/3 innings as the #2 starter behind Crow; Missouri finished 19th in NCAA Division I. Kyle was third in the Big 12 Conference in wins behind Crow and Tyler Lyons. He tied for third in the Conference in strikeouts, trailing Crow and Johnny Dorn.

Gibson spent the summer of 2008 with Team USA, going 5-0. He allowed only one hit and no runs in 5 1/3 innings in the 2008 Haarlem Baseball Week, going 2-0. He tied Mike Minor and Stephen Strasburg for the tournament lead in wins as the USA picked up a Gold Medal. In the 2008 World University Championship, Kyle was 2-0 with a 1.69 ERA and led the US with 5 appearances; one of his wins came in the Gold Medal game against Japan. He tied Kai-Wen Cheng, Shinji Iwata and Shingo Tatsumi for the tournament lead in victories.

Gibson kept up his fine work in 2009. With Crow gone, he became Missouri's ace and went 11-3 with a 3.21 ERA. He fanned 131 and walked 19 in 106 2/3 innings, tying Max Scherzer's school record for Ks in a season. Among the highlights was a 11-strikeout shutout win over the #1-ranked University of Texas. He finished among NCAA Division I's leaders in strikeouts.

For bad timing, Gibson was diagnosed with a stress fracture in his right arm on June 6, 3 days before the 2009 amateur draft. This lowered his stock from top-5 and he fell to 22nd overall before the Minnesota Twins chose him. He was signed by scout J.R. DiMercurio for $1.85 million, but didn't play that year due to the injury.

He had a horrid pro debut for the Fort Myers Miracle on April 8, 2010, versus the Bradenton Marauders. He fanned 7 in 3 2/3 IP but was tagged for six hits and five runs in a loss. Things went much better after that, as he went 4-1, 1.87 in 7 starts for Fort Myers, then received two promotions before the year as over, ending in AAA with the Rochester Red Wings. Overall, he was 11-6, 2.96, confirming his status as a top prospect. Indeed, Baseball America ranked him #34 before the beginning of the 2011 season. They also rated him as the #7 prospect in the 2010 Eastern League, between Alex White and Lonnie Chisenhall. He was back at Rochester that year, but his won-loss record was only 3-8 in 18 starts with a 4.81 ERA. He did pitch in the 2011 Futures Game, but at the time when he was expected to make his major league debut in September, he instead underwent Tommy John surgery; he had been shut down with pain in his elbow since August 3rd.

Recovering from the surgery, he pitched only 13 times in the minors in 2012, including 9 rehabilitation appearances with the GCL Twins and 2 more in Class A with Fort Myers. Those low-level outings, went well, but he was shelled for 11 hits and 7 runs in 6 2/3 innings at AAA Rochester. In 2013, he was back at Rochester, but pitching a lot better. After 15 games, he was 7-5, 3.01 and got the call to Minnesota on June 29th, when he started against the Kansas City Royals. His teammates gave him a big boost by scoring 5 runs in the bottom of the 1st, and he cruised to a 6-2 win with 6 innings of work in which he gave up 2 runs on 8 hits, walking none and striking out 5. In 10 starts that year, he was 2-4, 6.53, with 69 hits allowed in 51 innings.

Gibson had a solid first season with the Twins in 2014, as he went 13-12, 4.47 in 31 starts, pitching 179 1/3 innings. His win/loss record was particularly good in the context of a team that played well below .500 that season. In 2015, his ERA improved to 3.84 in 32 starts and 194 2/3 innings, and his record was 11-11. The Twins improved significantly that season, and his solid and regular pitching was one of the factors helping the team progress. 2015 was a year of struggles, however, as his ERA shot up and he missed some time with injuries for the first time. On August 17th, however, he pitched the first 9-inning complete game of his career in a 10-3 win over the Atlanta Braves; he had pitched another complete game in 2015, but it had come in an 8-inning loss.

Gibson had one of the best ERAs in the American League over the first four months of the 2021 season while pitching for the Texas Rangers. That earned him his first All-Star berth at 33, but there seemed to be little rhyme or reason to his success. He went 6-3, 2.87 in 19 starts, as it seemed to simply be a creation of lower hit rate than usual, seemingly because he was unusually lucky in terms of BABIP, something that has time and again been demonstrated to be unsustainable as it is not a result of skill. His FIP - that is his ERA independent of luck - should have been at 3.75 given his overall numbers, and there was a real risk that he could turn back into his usual self - a slightly below average pitcher with an ERA around 4.50 - at any time. The Rangers probably understood this when they elected at the trading deadline to send him to the Philadelphia Phillies alongside closer Ian Kennedy - another 30-something pitcher doing well, but one with a proven track record - and Hans Crouse in return for Spencer Howard and two prospects. The Phillies figured that even if Gibson regressed somewhat, he would still be better than when they already have, as Vince Velasquez and Matt Moore, their #4 and 5 starters, had combined for an ERA of 5.87!

Gibson's repertoire includes a fastball in the low 90s, a slider and curveball. He is very much a ground ball pitcher and his helped by an unusually high number of double plays turned by his defence as a result. This helps to compensate for a strikeout rate that is below average.