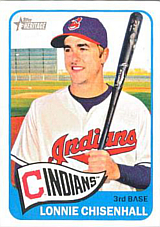 Lonnie Chisenhall is a convicted felon who was a top draft pick of the Cleveland Indians in 2008. He battled injuries and inconsistency during an eight year career.

Lonnie hit .574 as a high school senior in 2006 with 9 home runs in 68 at bats as Baseball America named him a second-team high school All-American infielder. He was picked in the 11th round of the 2006 amateur draft by the Pittsburgh Pirates but opted to go to the University of South Carolina instead. His freshman season was derailed by his off-field law-breaking: he was arrested for burglary and grand larceny and was dismissed from the squad in March. He pleaded guilty and was sentenced to six months' probation. When asked about his actions over a year later, Chisenhall said his only mistake was that was he was caught: "It taught me to be smarter... I watch my steps closer." [1] Chisenhall transferred to a junior college and, evidently, teams were not turned off by his off-field transgressions. He was picked 29th overall in the 2008 draft by the Cleveland Indians, signed by scout Bob Mayer for a $1.1 million bonus and made his pro debut with the Mahoning Valley Scrappers on June 17, going 2 for 5 with a double and 3 runs against the Williamsport Crosscutters. For the year, he hit .290/.355/.438. Baseball America rated him the 6th best prospect in the New York-Penn League, right behind Travis d'Arnaud.

Lonnie split 2009 between the Kinston Indians (.276/.346/.492, 18 home runs, 79 RBI in 92 games) and the Akron Aeros (.183/.238/.287 in 24 games). For the year, he belted 31 doubles, 22 home runs and 92 RBI. Baseball America rated him the best batting prospect and 5th-best overall prospect in the Carolina League behind Jason Heyward, Brian Matusz, Pedro Alvarez and Freddie Freeman. Despite an unimpressive start to 2010 with Akron, Chisenhall was put on the US roster for the 2010 Futures Game. Backing up Mike Moustakas at third base, he first came up in the sixth inning and drew a walk from Trystan Magnuson. In the 8th, he grounded out versus Eduardo Sánchez. Overall, on the year, he hit .278/.357/.450 with 17 homers, 81 runs scoed and 84 RBI for the Aeros. He fielded only .929 at third base and hit .234 against left-handed hurlers (.301 against righties). Baseball America picked him the 6th best prospect in the Eastern League after Domonic Brown, Zach Britton, Kyle Drabek, Brandon Belt and Andrew Brackman - and 25th overall in the minors.

On June 9, 2014, Chisenhall had one of the best nights by any batter in Indians history when he went 5 for 5, with three of the hits being home runs, and drove in 9 runs in a 17-7 win over the Texas Rangers. He was only the fourth player since 1900 to collect 5 hits, 3 homers and 9 RBI in a game, the last having been Fred Lynn of the Boston Red Sox on June 18, 1975. The 9 RBI tied a franchise record set by Chris James in 1991. The historic night improved his batting average on the year to .385, after he started the season platooning at third base. He ended up playing 142 games for the Indians that season, hitting .280/.343/.427 with 29 doubles, 13 homers, 62 runs scored and 59 RBI. It looked like he was going to settle in for a long run as the team's third baseman, but he started the 2015 cold, hitting only .209 in his first 52 games, with 4 homers and 19 RBI. On June 7th, the Indians decided to send him down to Columbus, alongside shortstop José Ramírez, whose batting average was even lower than Lonnie's. Ironically, Ramirez would become the Indians' starter at third base in short order, while Chisenhall moved to right field after his return. He played 106 games that season, hitting .246/.294/.372 with 7 homers and 44 RBI.

He became a free agent after the season and, on November 27, signed a one-year deal with the Pittsburgh Pirates worth $2.75 million. With right fielder Gregory Polanco recovering from a late-season injury and unlikely to be available until May, the Bucs were looking at Lonnie as a temporary replacement at the position, with a chance to earn further playing time if he did well during that stint. He earned no playing time, missing the entirety of the season with injuries. In February 2020, he announced his retirement.