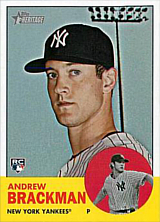 Pitcher Andrew Brackman reached the majors with the New York Yankees in 2011.

Brackman grew up in Cincinnati and attended Moeller High School. He went to college at NC State, where he also played two seasons of basketball. He was selected by the Yankees in the first round of the 2007 amateur draft, 30th overall. He was rated higher by scouts, but fell in the draft as he was considered a very tough sign. He was signed by scout Steve Swail for a $3.35 million bonus on the August 15 deadline and had Tommy John surgery shortly afterward. He had an appendectomy the following spring and did not make his pro debut until 2009.

Brackman shot through the Yankees minor league system and, at one time, was rated their third-best prospect by Baseball America. H is major league career was very brief. He made three appearances between September 22 and September 28, 2011, walking 3 with no strikeouts in 2 1/3 career innings. He was let go after the season and logged two more years in organized baseball: 2012 in the Cincinnati Reds organization and 2013 in the Chicago White Sox chain.