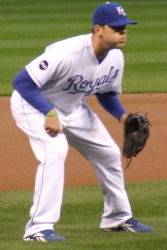 Mike Moustakas was a top pick in the 2007 amateur draft who made his major league debut in 2011. He is a nephew of Tom Robson.

He was taken by the Kansas City Royals with the second pick of the 2007 draft. He had set California state home run records for a career (52) and season (24). When teammate Matt Dominguez was taken 12th, they became the pair of high school teammates to have been been chosen highest in the same draft. Moustakas and Dominguez both graduated from Chatsworth High School, the same high school that had produced Dwight Evans four decades earlier. In 2006, Moustakas had hit .231/?/.375 for the USA junior national team. In the 2006 World Junior Championship, he drove in five runs against Italy and made a home run-robbing catch against Cuba in the quarterfinals. The USA finished with a silver medal. Moustakas won the 2007 Baseball America High School Player of the Year Award.

Moustakas signed with scout John Ramey for $4 million in time to make his professional debut late in 2007. He played DH for the Idaho Falls Chukars on August 25th against the Ogden Raptors, going 2 for 5 with a two-run double and two strikeouts. He hit .293/.383/.439 for the season. Baseball America rated him as Kansas City's top prospect going into 2008.

In 2008, the Los Angeles native batted .272/.337/.468 for the Burlington Bees. He led the Midwest League with 22 home runs and was second in total bases behind Mitch Moreland. He was the first teenager to lead the MWL in homers since Steve Gibralter 16 years prior. He alternated between shortstop and third base that year. Baseball America rated him as the top prospect in the league, followed by Neftali Feliz, Jarrod Parker, Ben Revere and Brett Wallace. Mike failed to make the league All-Star team as Brandon Waring was picked at third and Zach Cozart at short. Moustakas was again rated Kansas City's top prospect at year's end as well as the 13th-best prospect in all of baseball.

Moustakas led all Royals farmhands with 32 doubles in 2009. He hit .250/.297/.421 for the Wilmington Blue Rocks with 16 homers and 86 RBI, but the OBP under .300 was likely a cause for concern among the Royals. He fielded .931 at third base, having moved full-time from short. Mike led Carolina League third basemen in errors (24) and double plays (25). He was third in the league in RBI, trailing Brandon Waring by four and Donell Linares by one. Baseball America downgraded him to the #8 prospect in the Carolina League (fourth among infielders behind Pedro Alvarez, Freddie Freeman and Lonnie Chisenhall) and #80 in all of baseball.

In the Arizona Fall League, Mike hit .267 with five homers for the Surprise Rafters. His 19 RBI were second on the club behind Brandon Laird and he tied Colin Curtis for the most dingers. Moustakas showed significant improvement after kicking off 2010 with the Northwest Arkansas Naturals, hitting .347/.413/.687 with 21 homers and 76 RBI after 66 games in AA to earn a mid-season promotion to AAA. That performance would eventually earn him Texas League Player of the Year honors at the end of the season. He also played for the USA in the 2010 Futures Game, starting at third base and hitting third. While the US won 9-1, Moustakas struggled. He popped up against Simon Castro, ground out versus Alexander Torres and hit into a double play against Henderson Alvarez before being replaced by Chisenhall. He had a game for the ages on August 30 for Omaha against the Round Rock Express, hitting a pair of three-run homers, a two-run homer and a three-run double for a team-record 11 RBI in a 23-5 win. He hit .293/.314/.564 in 52 games for Omaha. His 36 homers between his two stops were tops in the minor leagues that year and after the season he was named Baseball America's #9 prospect, one of a number of young Royals players to be distinguished by the magazine that off-season.

Moustakas started the 2011 season back in Omaha, where he hit .287/.347/.498 in 55 games. He earned a promotion to Kansas City on June 10th, a few weeks after teammate Eric Hosmer. He started at 3B against the Los Angeles Angels that day and went 1 for 3 with a walk; the next day, he hit his first major league home run, a solo shot against Joel Pineiro.

Moustakas was the hero for the Royals in Game 1 of the 2014 ALDS on October 2nd as he homered off Fernando Salas of the Los Angeles Angels of Anaheim to lead off the 11th inning, a blast that proved to be the game winner in a 3-2 win.

On September 12, 2015, he set a franchise record with 9 RBIs in a 14-6 win over the Baltimore Orioles; he hit a two-run single in the 6th, his second career grand slam in the 7th and a three-run homer in the 9th. Billy Butler held the previous record with 7.

On May 22, 2016, he was involved in a collision with LF Alex Gordon while chasing a foul ball in the outfield. Both players were hurt, but at first, it seemed that Gordon's injuries were the most serious. However, later exams revealed that Moustakas had torn a ligament in his right knee and would require season-ending surgery. He was hitting .240 with 7 homers and 13 RBIs in 27 games, having already missed three weeks with a broken thumb before the collision with Gordon.

He was the winner of the Final Man Vote in the American League for the 2017 All-Star Game, earning him his second berth in the Mid-summer Classic, and the second time he had won the Final Man Vote too, as that had been his ticket to the 2015 All-Star Game as well. He hit his 30th homer of the year on July 28th, reaching the mark for the first time and moving within sight of the Royals team record of 36, set by Steve Balboni in 1985. He tied that mark on September 1st with a long ball in a 7-6 win over the Minnesota Twins, then had to wait until September 20th to pass it, when he connected off Carlos Ramirez in a 15-5 beating of the Toronto Blue Jays. He finished the season with 38 homers, to go along with 85 RBIs and a .272 average in 148 games.

He then became a free agent and thought his excellent season would allow him to cash in with a lucrative multi-year contract. Thus, he turned down a qualifying offer of $17.4 million from the Royals in order to test the market, only to be one of numerous victims of a very weak market for free agents, a situation that created significant tensions between the Players' Association and major league owners. On March 8, 2018 he had to resign himself to return to the Royals, becoming a poster boy for the depressed market: not only did he sign just a one-year deal for an amount nowhere near the offer he had turned down earlier, but the amount he accepted - $5.5 million with a $1 million guaranteed buyout - was less than the $8.7 million he had made before his record-breaking season! He hit .249 in 98 games for the Royals, along with 20 homers and 62 RBIs and on July 27th, he was traded to a contender, heading to the Milwaukee Brewers in return for P Jorge Lopez and IF Brett Phillips. In order to wedge his bat into the line-up, the Brewers were intending to move 3B Travis Shaw to second base, a position he had never played. In 54 games for the Brewers, he hit .256 with 8 homers and 33 RBIs. He then went 4 for 11 as the Brewers swept the Colorado Rockies in the Division Series, but just 4 for 29 in their loss to the Los Angeles Dodgers in the NLCS.

After the 2018 season, the Brewers made it clear they were interested in bringing back Moustakas, although not on a long-term contract. It took a while, but on February 17, 2019, the two sides agreed on a one-year deal worth $10 million. He had another very solid season for Milwaukee, returning to the All-Star Game for the third time while hitting .254 with 35 homers and 87 RBIs in 143 games. The Brewers made it back to the postseason, but Moustakas was shut down in the Wild Card Game, going 0 for 4 as the Brewers lost to the Washington Nationals. After the season, he managed to finally receive a decent free agent contract, signing with the Cincinnati Reds on December 2nd for 4 years and $64 million. The Reds said they intended to use him at second base in 2020, with Eugenio Suarez entrenched at third.