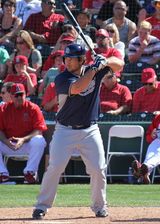 Brett Wallace won a Triple Crown in one of the top college conferences in 2007 then made it to the majors three years later.

Wallace joined Team USA for the summer and hit .312, third on the team behind Josh Romanski and Pedro Alvarez, while alternating between the outfield and first base. He was 4 for 18 with a double and no walks in the 2007 Pan American Games as the US won Silver. He hit .200/.320/.200 in the 2007 World Port Tournament, splitting first base duties with Justin Smoak.

The St. Louis Cardinals chose Wallace with the 13th overall pick of the 2008 amateur draft, two spots after Smoak. He was signed by scout Chuck Fick and made his minor league debut on July 2 for the Quad Cities River Bandits, going 0 for 2 with 2 walks. He hit .327/.418/.490 in 41 games for Quad Cities and was then promoted to AA, hitting .367/.456/.653 in 13 games for the Springfield Cardinals. Despite his short stay, he was ranked as the #5 prospect in the Midwest League by Baseball America, following Mike Moustakas, Neftali Feliz, Jarrod Parker and Ben Revere.

Wallace began 2009 back with Springfield and batted .281/.403/.438 in 32 games. Bumped up to the AAA Memphis Redbirds, he hit .293/.346/.423 in 62 contests. St. Louis then shipped him with Shane Peterson and Clayton Mortensen to the Oakland Athletics for Matt Holliday. He batted .302/.365/.505 for the Sacramento RiverCats after the trade. He totaled 20 homers between his three stops. Baseball America rated him the #5 Texas League prospect (behind Mat Latos, Justin Smoak, Chris Carter and Jhoulys Chacin) and #7 in the Pacific Coast League (behind Cameron Maybin and Alcides Escobar and ahead of Kyle Blanks and Smoak).

He was acquired by the Toronto Blue Jays following the 2009 season, as they flipped one of the prospects they had acquired from the Philadelphia Phillies for Roy Halladay, Michael Taylor, to land Wallace on December 16, 2009. He spent the first four months of the 2010 season with AAA Las Vegas, where he hit .301 with 24 doubles and 18 homers in 95 games. On July 29, the Blue Jays sent him to the Houston Astros in return for outfield prospect Anthony Gose, whom the Astros had just obtained from the Phillies for their own ace, Roy Oswalt. When Houston traded starting 1B Lance Berkman to the New York Yankees the next day, Wallace was called up to take his place and made his major league debut on July 31, going 0 for 4 against the Milwaukee Brewers.