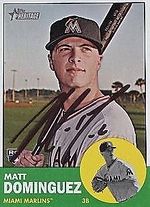 Third baseman Matt Dominguez was selected by the Florida Marlins in the first round of the 2007 amateur draft. He is the brother of Jason Dominguez, both are of Cuban heritage.

Matt drove in 65 runs as a high school freshman to help Chatsworth High School to a #1 ranking nationally; it was the highest RBI title by a freshman in the history of California high school baseball. The 14-year-old hit .461, batting behind brother Jason in the heart of the Chatsworth lineup. Dominguez played for the US junior national team in 2006, helping them to a silver in the World Junior Championship. He hit .241 in the event but led the US with 2 homers and 11 RBI. He hit a 3-run homer in a 4-0 win over Cuba.

In 2007, the third baseman hit .443 with 13 HR and 42 RBI. He earned his fourth straight All-state selection. USA Today named him to their first team All-USA squad. He was the 12th overall pick of the 2007 amateur draft, taken by the Florida Marlins. As teammate Mike Moustakas was taken second overall, it marked the first time two high school teammates were picked that early in the same draft.

He signed with scout Tim McDonnell and made his pro debut that summer with the GCL Marlins, playing in 5 games and going 2 for 20 with a walk for them before being promoted to the Jamestown Jammers. He only hit .189/.211/.324 in 10 games for Jamestown, striking out in 12 of 37 at-bats for a composite .158 debut in pro baseball. He did much better in 2008, hitting .296/.354/.499 in 88 games for the Greensboro Grasshoppers of the South Atlantic League. In 2009, he began the season with the Jupiter Hammerheads of the Florida State League, where he hit .262 in 103 games. He earned a promotion to the AA Jacksonville Suns but struggled there, hitting only .186 in 31 games. He returned to Jacksonville in 2010 and did much better, consolidating his status as one of the Marlins' top prospects. He hit .252/.333/.411 in 138 games, with 34 doubles and 14 homers. While these numbers were superficially unimpressive, it should be noted that he was one of the youngest players in the circuit at age 20, and that Jacksonville is not a hitter-friendly environment. Baseball America put him at #81 on its list of top-100 prospects in baseball after the season.

In 2011, Dominguez went to spring training with a chance to grab the job as the Marlins' starting third baseman. In the end, the Marlins decided to send him to AAA for more seasoning after he struggled at the plate, but he fractured his elbow when hit by a pitch in his first game for the New Orleans Zephyrs on April 1. He returned to the line-up in May, but hit only .186 with a home run and 8 RBI in his first month back. Things got better after that, but on August 10th, he left a game with a harmstring pull which sent him back to the disabled list. He was hitting .248 with 11 homers and 56 RBI. He made it back in time to earn a September call-up, and in his first major league plate appearance on September 6th against the New York Mets, he was hit by a Pedro Beato fastball as a pinch-hitter in the 10th inning. He was given his first major league start at third base the next day and went 1 for 3. In 17 games with Florida, he hit .244 with 4 doubles and 2 RBI.

Dominguez was back in the minors at the start of 2012 but struggled with New Orleans, hitting only .234 in 78 games, although he did hit 14 doubles and 7 homers. On July 4th, he was traded to the Houston Astros along with P Rob Rasmussen in return for veteran slugger Carlos Lee.