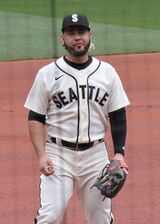 Eugenio Suarez was signed by scout Alejandro Rodriguez for the Detroit Tigers in 2008. He made his pro debut the next summer for the VSL Tigers.

In only his 8th major league game, Suarez came within a single of hitting for the cycle in leading the Detroit Tigers to a 12-9 win over the Minnesota Twins on June 14th. Hitting 9th, the young shortstop led off the bottom of the 3rd with a homer off Samuel Deduno, then came back up later in the inning after the Tigers had batted around and hit a double off Anthony Swarzak. He walked in the 5th against Swarzak, then in the 7th, he greeted Caleb Thielbar with a lead-off triple then scored on Ian Kinsler's sacrifice fly. He add a chance to add the missing single in the 9th but grounded into a force out at third. He finished 3 for 4 with 3 runs and 2 RBIs. The performance pushed his average to .400, and the long ball was already his third, as he had gone deep off Jon Lester of the Boston Red Sox on June 7th in his first career start, and had added another two days later. he ended up getting the bulk of the playing time at shortstop for the Tigers the rest of the season, hitting .242 in 85 games, with 4 homers and 23 RBIs. However, when the postseason started, it was Andrew Romine who got the start in Game 1 of the Division Series against the Baltimore Orioles.

On December 11, 2014, the Tigers traded Suarez and pitcher Jonathon Crawford to the Cincinnati Reds for Alfredo Simon. He started the 2015 season in the minor leagues before being called up to Cincinnati on June 11th after SS Zack Cozart suffered a season-ending knee injury. He had hit .256 with 8 homers in 57 games for the AAA Louisville Bats before getting the call. He played 97 games for Cincinnati as Cozart's replacement and hit .280 with 13 homers and 48 RBIs to constitute on the few bright spots on the team that season. in 2016, he slid over to third base following the trade of Todd Frazier in return for prospects during the off-season. he played 159 games that season, hitting .248 but with 21 homers and 76 RBIs. In 2017, he had his best season, hitting .260 with 26 homers and 82 RBIs, ggod for an OPS+ of 115.

On March 16, 2018, the Reds announced that he had signed a seven-year extension worth $66 million. They cited his solid production on both offense and defence, but also his pleasant personality that made him highly appreciated around the clubhouse. He had received the Cincinnati baseball writers' Good Guy Award in 2017 as proof of this. He got off to a good start, hitting .296 through his first 8 games, including a collecting a career-high 5 RBIs on April 7th when he was sidelined for an extended period with a broken thumb. He suffered the injury when hit by a Jameson Taillon pitch on his right hand in a 5-0 loss to the Pittsburgh Pirates on April 8th. He was reactivated on April 26th.

On September 18, 2019, he hit his 48th homer of the year, setting a new record for most by a player from Venezuela. The record was previously held by Andres Galarraga, who hit 47 in 1996. He had a great month of September, hitting .337 with 10 homers and 18 RBIs in 25 games. He was named the National League Player of the Month and finished the season with a batting average of .271, 49 homers and 103 RBIs in 159 games. He finished second in the league in homers, behind rookie record-setter Pete Alonso, but also lead the circuit with 189 strikeouts. He started the 2020 stone cold, hitting just .118 over his first 20 games, before turning things around. On September 5th, he had the first three-homer game of his career in a 6-2 Reds win against the Pittsburgh Pirates. Still, the slow start mean that he finished just at .202 with 15 homers and 38 RBIs, his OPS+ down from 132 to 102. He appeared in the postseason for the second time, after a brief cameo in 2014, going 2 for 9 with a walk as the Reds were swept and shut out by the Atlanta Braves in the Wild Card Series. In 2021, in 145 games, he batted just .198, the lowest batting average of his career, with 31 homers and 79 RBIs. His OPS+ fell to 80.

On March 14, 2022, he was traded to the Seattle Mariners along with Jesse Winker in return for Justin Dunn, Jake Fraley, Brandon Williamson and a player to be named later (P Connor Phillips).