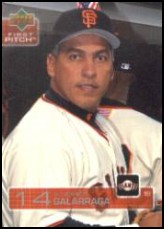 Andres Galarraga, the "Big Cat", is remembered primarily for his home-run hitting years in the favorable ballpark of the Colorado Rockies, but he also had good seasons with the Montreal Expos earlier in his career and the Atlanta Braves later in his career.

Never finishing higher than # 6 in the MVP voting, he was a five-time All-Star who won two Gold Gloves at first base while with the Expos, was the 1993 National League batting champion, the 1996 National League home run champ, and the 1996 and 1997 RBI leader, all with the Rockies. Based on Adjusted OPS, however, his best seasons were, in order, his 1993 year with the Rockies, his 1988 year with the Expos, and his 1998 year with the Braves. His 1996 and 1997 years were not in the top ten in the league in Adjusted OPS.

On July 3, 1995, he was the first Rockies hitter to collect 6 hits in a game. He went 6 for 6 hit a double and a pair of homers, scoring 4 runs and driving in 5, in a 15-10 win over the Houston Astros. His team record was only matched on April 4, 2014, when Charlie Blackmon had a similar huge day at the plate. On May 31, 1997, he hit a monstrous home run off Kevin Brown of the Florida Marlins which landed in the third deck at Coors Field. A team of civil engineers reconstituted the flight of the ball based on video evidence and concluded that the homer was hit 524 feet (i.e. that is the distance the ball would have traveled had it not been stopped by the seats), making it one of the longest ever ascertained.

He ranked third on the all-time list for the most strikeouts as of 2006, but has since been passed by a number of other players.

The two most similar players, according to the similarity scores method, are Orlando Cepeda and Jim Rice. Rice is a good comparison since they both played years in favorable hitters' parks. Cepeda, on the other hand, had the disadvantage of playing during the second dead-ball era, when it was much harder to post big stats.

Galarraga struggled with cancer twice during his career, once in 1999 and once in 2004. Had he not had cancer, he would likely have ended his career with many more than the 399 home runs he accumulated. Still that number was the most ever for a player born in Venezuela, a record he held until 2015 when passed by Miguel Cabrera.

He enjoyed painting landscapes in his spare time. He was active with the Denver Boys and Girls Club. He was elected to the Latino Baseball Hall of Fame as part of its 2011 class.