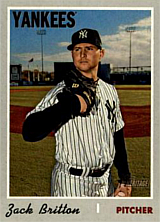 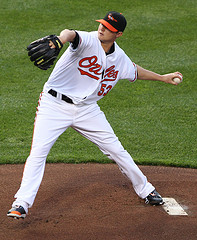 Left-handed pitcher Zack Britton made his major league debut with the Baltimore Orioles in 2011. He is a two-time All-Star.

Britton was the Orioles' 3rd round pick in the 2006 amateur draft, out of a Texas high school. He was signed quickly by scout Jim Richardson and began his professional career with the Rookie ball Bluefield Orioles of the Appalachian League, going 0-4, 5.29 in 11 starts. In 2007, he moved up to the Aberdeen IronBirds of the New York-Penn League, where he did better, going 6-4, 3.68 in 15 starts with a 45/22 K/BB ratio. Britton continued to improve in his first year of full-season ball, with the Delmarva Shorebirds of the South Atlantic League in 2008, where he was 12-7, 3.12, giving up only 118 hits in 147 1/3 innings. He continued to move up one level per season in 2009, spending the year in the advanced Class A Carolina League with the Frederick Keys, where he lowered his ERA for the 4th straight year, bringing it down to 2.70 in 25 games with a 9-6 record. After the season, he was named the league's Pitcher of the Year and made the Baseball America top 100 prospect list for the first time, earning the 63rd spot on the prestigious list. In 2010, he started the year with the Bowie BaySox of the AA Eastern League and continued to figure among his circuit's best pitchers, putting up a record of 7-3 with a sparkling 2.48 ERA in 15 games. Now on a faster track to the majors, Britton was promoted in midseason to the AAA Norfolk Tides, where he was only 3-4 but with a very good 2.98 ERA. Overall, his ERA was 2.70 in 27 games with 124 strikeouts in 153 1/3 innings. He was selected to pitch for the USA team in the 2010 Futures Game. Relieving Jeremy Hellickson to open the 3rd inning, he allowed a lead-off single to Francisco Peguero but then retired Brett Lawrie, Osvaldo Martínez and Yonder Alonso and was relieved by Zack Wheeler. After the season, his ranking on the Baseball America top 100 prospects list jumped 35 spots to #28.

Having mastered every level of the O's farm system, Britton headed to spring training in 2011 with an inside track for a job in the starting rotation. He earned it with a 1.35 ERA in 20 innings in the Grapefruit League, then was masterful in his major league debut facing the Tampa Bay Rays at The Trop on April 3rd. In 6 innings, he gave up only a run on 3 hits, striking out 6, to earn credit for the Orioles' 5-1 win. He continued to pitch well in the season's first weeks; on May 1st, he beat the Chicago White Sox, 6-4, to run his record to 5-1. He began to struggle afterwards and was sent to the minors in early July to right things. It did not really seem to work, as he was rocked on his return, giving up 9 runs in only 1/3 of an inning in the second game of a doubleheader against the New York Yankees on July 30th, as the Bronx Bombers rolled to a 17-3 win. In parts of three seasons as a starting pitcher going back and forth between Triple A and The Show (2011 to 2013), he was a .500 pitcher who never posted an ERA lower than 4.60 and walked 111 in 48 games (47 starts) and 254 2/3 innings.

Britton moved to the bullpen starting in 2014 and immediately found his calling. That first season, he saved 37 games with a 1.65 ERA to help lead the Orioles to a division title. He saved a pair of games as the O's swept the Detroit Tigers in the Division Series. In the ALCS against the Kansas City Royals, however, he gave up a run on 3 hits and 4 walks in 2 1/3 innings as the Orioles were swept. In 2015, he had another very solid year, going 4-1, 1.92 with 36 saves in 64 games. He was named to the All-Star team for the first time, but the Orioles did not make the postseason. In 2016, he had a season as good as any one-inning closer had ever put together: in 69 outings, he went 2-1 with 47 saves in 47 opportunities, pitched 67 innings, during which he gave up a mere 38 hits and 18 walks, struck out 74 and allowed a total of four earned runs for a microscopic ERA of 0.54. He set a major league record with a stretch of 43 consecutive appearances without allowing a run, from May 5th to August 22nd. The Orioles played in the Wild Card Game against the Toronto Blue Jays in a closely-fought game that took 11 innings to decide in favor of Toronto. Much to the puzzlement of O's fans, he was left on the bench as manager Buck Showalter was waiting to use him in a save opportunity that never came, instead handing the ball to Ubaldo Jiménez who gave up the game-winning homer to Edwin Encarnacion. Britton returned to the All-Star Game that season and led the American League in both saves and games finished, then was named the recipient of the Mariano Rivera Award as the best relief pitcher in the AL.

Zach got off to a fast start in 2017, recording 5 saves by April 14th, but then had problems with a forearm strain. He returned for a couple of games in early May, but on May 6th, he was placed on the disabled list and was expected to miss two months. The Orioles had started the season strong, but began to tread water as soon as their ace closer was on the shelf. He only came back on July 5th and did not get a chance to save another game until July 23rd, in his 8th appearance since his return. That save, coming in a 9-7 win over the Houston Astros, was a historic one, as it marked the 55th straight save opportunity Britton converted successfully, setting a new AL record; the mark had been held by Tom Gordon and Zach had tied it on April 14th before going to the DL. It was still well short of the major league mark of 84 held by Éric Gagné. He eventually ran the streak to 60 saves before faltering on August 23rd, blowing a two-run lead over the Oakland Athletics by giving up three straight hits and a sacrifice fly. He finished the year at 2-1, 2.89 in 38 games with 15 saves and 29 strikeouts and 18 walks in 37 1/3 innings, a far cry from his historic season the year before. The Orioles received some more bad news during the offseason when Zach suffered a ruptured Achilles' tendon while sprinting during a workout. He underwent surgery on December 21st, putting him out of action for at least four months.

In 2018, he did not appear in his first game until June 12th. He pitched very effectively, except for one bad outing on June 23rd when he gave up 4 runs in 1/3 of an inning against the Atlanta Braves. He kept a clean sheet in 14 of his 15 other appearances for the O's, going 1-0 with 4 saves and a 3.45 ERA in 15 1/3 innings. With the team in last place and looking to rebuild, he was on the radar for a number of teams looking to improve before the trading deadline. On July 24th, it was the New York Yankees who won the auction, obtaining him for three young pitchers: Dillon Tate, Josh Rogers and Cody Carroll. He was joining a team that already had three closers, with Aroldis Chapman, Dellin Betances and David Robertson. He pitched well for the Yankees, going 1-0, 2.88 with 3 saves in 25 games, with 21 strikeouts in 25 innings against 18 hits allowed. In the postseason, he was touched for 2 runs in just an inning in the Wild Card Game, but it did not prevent the Yanks from beating the Oakland Athletics. In the Division Series against the Boston Red Sox, he allowed just a run in 4 innings, a solo homer by Christian Vazquez to lead off the 4th inning of Game 4 on October 9th. The Yankees were already down 3-0 at the time, and ended up losing, 4-3, so the run proved quite important.

Britton became a free agent after the season and, on January 5, 2019, he re-signed with New York for three years and $39 million with an option for a fourth season. Around that time, he made it known that his name was "Zackary" and not "Zachary" as reported in most sources, and that he wanted to be known by the spelling "Zack" henceforth. Moving firmly into the role of a set-up weapon, he made 66 appearances out of the Yankee pen in 2019, pitching to a 3-1, 1.91 mark with 3 saves. He put together 8 innings of one run ball in the postseason, with an impressive 5 2/3 scoreless innings against the vaunted Houston Astros lineup, as the Yanks bowed out in six games in the ALCS.

Britton's best pitch is his sinker. He relies on it more than any other pitcher and, in fact, in 2018, used it 92.1% of the time according to Statcast. James Pazos was the only other pitcher with usage above 90% and three others were above 75%, whereas the average pitcher uses it just 19% of the time. While the usage of the pitch was going down significantly around Major League Baseball, it continued to be an extremely effective weapon for Britton.