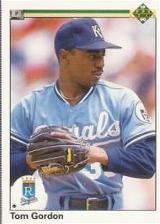 Tom Gordon was signed as a 6th round pick in the 1986 amateur draft by the Kansas City Royals and scouts E.E. "Red" Whitsett and Al Diez.

Gordon made his major league debut with the Royals late in the 1988 season and was runner-up for the 1989 American League Rookie of the Year Award to Gregg Olson, a closer, despite winning 17 games as a starter. Several years later, Gordon and Olson would reunite as teammates on the Kansas City Royals.

In 1999, author Stephen King published a novel titled The Girl Who Loved Tom Gordon, referring to his outstanding 1998 season with the Boston Red Sox; King is a well-known Red Sox fan. That year and in 1999, Gordon set an American League record by successfully converting 54 consecutive save opportunities; that record held until broken by Zach Britton in 2017. He missed the 2000 season following arm surgery. He was given only a 20-30% chance of pitching again at that point, but returned to play in the majors until 2009.

In an interesting statistical quirk, he is the only pitcher in major league history to have accumulated at least 100 wins, 100 saves and 100 holds. This is a tribute to his longevity and to the fact he was used in the three main pitching roles - starting pitcher, closer and middle reliever - for long stretches. Most pitchers will tend to specialize in just one of these, or maybe two, over the course of their careers.

He is the father of Dee Gordon and Nick Gordon.