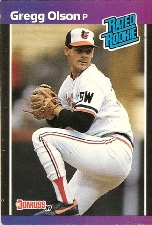 Gregg Olson was 2-0 with 2 saves and a 3.53 ERA in 21 games for Team USA in 1987. He tied Cris Carpenter for the team lead with 69 strikeouts and his 51 IP were second to Carpenter. Carpenter's presence allowed Olson to join the rotation for the 1987 Pan American Games, where the US got a Silver. He was signed as a 1st round pick in the 1988 amateur draft by the Baltimore Orioles and scout Lamar North and made his major league debut with the Orioles barely two and half months later, at the end of the 1988 season.

He was installed at the Orioles' closer as soon as he was called up, and in 1989 his 27 saves, to go along with a 5-2 record, a 1.69 ERA in 64 games and 90 strikeouts in 85 innings were one of the key elements that turned a last-place Baltimore team the previous year into a surprise postseason contender (they were only eliminated) by the Toronto Blue Jays in the last days of the regular season. Olson was named the recipient of the 1989 American League Rookie of the Year Award in recognition of his great season. However, he did not make the 1989 Topps All-Star Rookie Team as it did not feature a relief pitcher: Tom Gordon, who won 17 games for the Kansas City Royals and finished second in the Rookie of the year vote, made the team as the right-handed pitcher.

Olson had one career hit, a home run off Oscar Henriquez of the Florida Marlins on April 20, 1998 while playing for the Arizona Diamondbacks.

He is not to be confused with Greg Olson, a catcher who spelled his first name with only one "g". The two faced each other in the 1990 All-Star Game.

Olson was an announcer for the College World Series Greenville Super Regional in 2022.