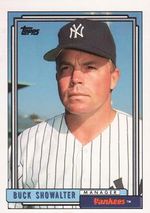 First baseman/outfielder Buck Showalter was an All-American outfielder in 1977 and was selected by the New York Yankees in the fifth round of the 1977 amateur draft. He spent seven years as a player in the Yankees farm system, hitting .324 for the Nashville Sounds in 1980 and leading the Southern League with 178 hits. During his playing days he picked up the nickname "Buck" from a minor league manager's comment on his tendency to walk around the clubhouse "buck naked".

Showalter retired as a player after the 1983 season and became a minor league coach in the Yankees farm system. From 1985 to 1989, he was a manager in their organization. When he took over the Oneonta Yankees in 1985 he was only 28 years old. In his two seasons with the O-Yanks he set new league records for wins each year. It is also where he began his long working relationship with pitching coach Monk Meyer. In 1990, he became a Yankees big league coach, and two years later, he took over as the club's manager. After four years as their skipper, he joined the expansion Arizona Diamondbacks as their first manager. He spent 2001 and 2002 as an ESPN broadcaster before returning to the dugout in 2003 as manager of the Texas Rangers. He was fired on October 4, 2006, after four seasons at the helm of the Rangers. Only in 2004 did he lead the team to a winning record.

After being fired by the Rangers, Showalter worked in the Cleveland Indians front office. On July 29, 2010, he was hired by the Baltimore Orioles to be their new manager, replacing interim skipper Juan Samuel. On May 1, 2012, he won his 1,000th game as a major league skipper; his record at that point was 1,000-958, rather remarkable given that he had regularly taken the helm of losing teams, or even an expansion team. He became the 4th manager to win 250+ games with four different clubs, following Joe Torre, Gene Mauch and Dick Williams. He helped turn the Orioles around, as in 2012 they reached the postseason for the first time since 1997, bowing to the New York Yankees in the ALDS. In 2014, they won a division title and made it to the ALCS, where they were swept by the Kansas City Royals, then in 2016, they were a wild card team but lost the Wild Card Game to the Toronto Blue Jays. In that game, Showalter was widely criticized for not using his top relief pitcher, Zach Britton, coming off an exceptionally good season, as the Orioles lost in 11 innings. That season, he moved past Jimmie Dykes on the all-time list for managerial wins with 1,429, making the manager with the second most wins never to have taken part in a World Series, behind only Gene Mauch.

Showalter's final two seasons at the helm of the Orioles were disappointing. They finished in last place both years, although with a still respectable record in 2017. In 2018, however, the bottom fell out, they lost a team record 115 games and upper management conducted a mid-season fire sale. It was clear that a through rebuilding was needed, and also that Showalter was not the man to lead it. He was dismissed on October 3rd, three days after the painful season ended.

On December 18, 2021, it was announced that he was hired by the New York Mets to be their manager in 2022, replacing Luis Rojas who had been fired at the end of the season. The Mets were taking a page of out of the book used the previous season by the Chicago White Sox, when they had brought Tony LaRussa out of retirement to manage the team.