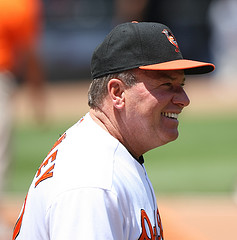 Dave Trembley managed in the minors for 20 years and was the manager of the Baltimore Orioles from 2007 to 2010.

Trembley began his baseball career by serving as a coach at a Los Angeles, CA high school for several years. From there, he went on to serve as head coach at Antelope Valley Junior College from 1980 to 1984. He then joined the Chicago Cubs organization, first as a scout and later as a minor league coach. In 1986, Trembley got his first managerial job with the unaffiliated Kinston Eagles of the Carolina League. The next year, he took over as manager of the Harrisburg Senators and was named Baseball America Minor League Manager of the Year.

Trembley spent time managing in the Pittsburgh Pirates, San Diego Padres, and Chicago Cubs farm systems before joining the Baltimore Orioles as skipper of the Bowie Baysox in 2003. After two years there, he spent two seasons leading the Ottawa Lynx. He managed continuously in the minors from 1986 to 2006, except for the 1990 season, when he was manager of the Pittsburgh Pirates' minor league training complex in Bradenton, FL.

In 2007, he was named the bullpen coach for the Orioles. On June 18th, he was appointed interim manager after the club fired Sam Perlozzo. The team was in last place in the AL East, with a record of 29-40 at the time. After Joe Girardi turned down the job, Trembley was given an extended chance to see if he would have the job long-term. In late August, 2007, it was announced that Trembley would return as Orioles' manager for the 2008 season. The O's promptly lost 15 of their next 17 games, including a game where they gave up an AL-record 30 runs to the Texas Rangers. The team's abysmal pitching was more to blame than Trembley, however.

Trembley was given more than two full seasons to turn the Orioles around, but never managed to get them out of the AL East cellar. He did succeed in integrating a few good young players into the line-up, with Adam Jones and Nick Markakis emerging as solid outfielders, but shortstop was a constant source of problems during his tenure, and he was unable to develop a reliable crop of pitchers. While a few young starters like Brad Bergesen and David Hernandez showed flashes of talent, the top of his starting rotation was always patched up, with the veterans expected to provide leadership not contributing, and the bullpen was often a disaster area. He was dismissed on June 4th, 2010 with the Orioles owning the worst record in the major leagues at 15-39 and was replaced on an interim basis by third base coach Juan Samuel.

In 2013, Trembley returned to the major leagues as third base coach with the Houston Astros under new manager Bo Porter. In 2014, he moved to bench coach under Porter. On September 1st both he and Porter were fired by the Astros even though the team was much improved, the result of a power struggle with General Manager Jeff Luhnow.