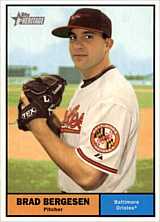 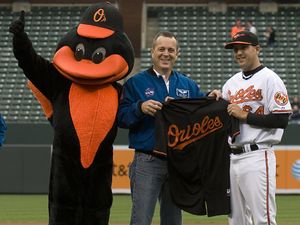 Bergesen accepts a jersey from an astronaut in April 2009

Brad Bergesen was drafted by the Baltimore Orioles in the 4th round of the 2004 amateur draft. He was signed by scout Ed Sprague and made his pro debut that summer. In 2006, Bergesen battled mononucleosis, which kept him off the field for a month and sapped his strength for the whole summer.

The Orioles' Minor League Pitcher of the Year in 2008, Bergesen won his major league debut with the O's on April 21, 2009, giving up 4 hits and one earned run in 5⅔ innings against the Chicago White Sox. He hung around parts of 3 seasons in Baltimore and pitched in 2012 with the Arizona Diamondbacks. After spending 2013 with the Chunichi Dragons of NPB, he spent parts of a handful of seasons in the Atlantic League before walking away.

Bergesen became a pitching coach for the Lakewood BlueClaws in 2018 and Clearwater Threshers in 2019. He was scheduled to be pitching coach of the Reading Fightin Phils in 2020 before the season was cancelled due to Covid-19 then did coach Reading in 2021.