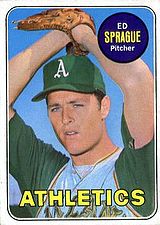 He was a teammate of Reggie Jackson with the Oakland Athletics, of Pete Rose, Johnny Bench and Joe Morgan with the Cincinnati Reds, of Joe Torre and Lou Brock with the St. Louis Cardinals, and of Hank Aaron and Robin Yount in Milwaukee.

Sprague bought the Stockton Ports in 1979. While he owned that team, his wife Michelle bought the Lodi Dodgers in 1981. [1]

Sprague scouted for the Baltimore Orioles from 1988 into the mid-2000s, signing Mike Mussina, Jeffrey Hammonds [2], Ken Shamburg and Brad Bergesen among others.