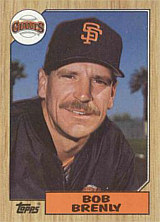 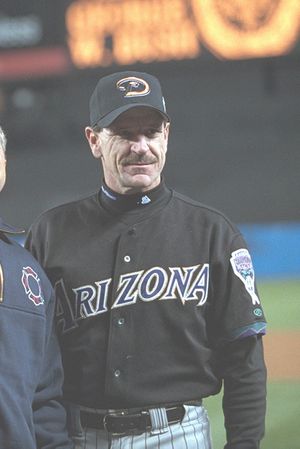 Brenly as Diamondbacks manager during the 2001 World Series

A catcher, Brenly was signed as a free agent by the San Francisco Giants and scout Herman Hannah on June 21, 1976. He reached the majors with the club in 1981 and became a regular behind the plate in 1983. The next summer, he had his finest year in the bigs, hitting .291 with 20 homers and 80 RBI and earning a spot on the National League All-Star team. In a September 14, 1986 game against the Atlanta Braves, Brenly started at third base and made four errors in one inning. However, he went 3 for 5 with 2 home runs and 4 RBI at the plate in that contest, driving in the winning run with a homer in the bottom of the 9th. After eight seasons with the Giants, Brenly signed with the Toronto Blue Jays prior to the 1989 season. He appeared in 48 games for the Jays and then returned to San Francisco late in the year, finishing his career.

Following his playing days, Brenly was a Chicago Cubs broadcaster in 1990 and 1991. He spent several years as a member of the Giants coaching staff from 1992 to 1995. He returned to the broadcast booth in 1996 for the FOX network and was later a member of the Arizona Diamondbacks TV crew during their inaugural season of 1998. Brenly became the D-Backs manager in 2001 and led the club to a World Series championship in his rookie year. He remained at the helm of the team for three and a half seasons. From 2007 to 2012, he provided color commentary on Cubs games before jumping back to the booth of the Diamondbacks, where he is currently partnered with Steve Berthiaume. From 2007 to 2013, he also provided color commentary nationally on TBS, primarily working with Dick Stockton.

His son, Mike, was drafted by the Cubs in the 2008 amateur draft and played in their organization.