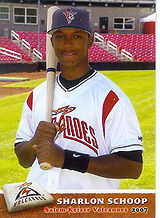 Sharlon Schoop played his 7th minor league season in 2011. His brother Jonathan Schoop made the majors in 2013.

Schoop signed with the San Francisco Giants shortly before his 17th birthday. He debuted professionally with the 2004 DSL Giants, hitting .251/.353/.337. In 2005, he batted .254/.328/.296 for the AZL Giants. He led Arizona League shortstops in putouts (72), assists (162), double plays (28) and fielding percentage (.971) to help the team to the AZL title. He was rated the league's #11 prospect by Baseball America, one slot behind teammate and fellow Curacao native Shairon Martis. Schoop split 2006 between the AZL Giants (.310/.437/.405) and Salem-Keizer Volcanoes (four games). He made the Arizona League All-Star team as the shortstop and finished 4th in the league in OBP. On July 2, he hit for the cycle against the AZL Royals, the only player to perform the feat in the AZL that year. Baseball America rated him as the league's #7 prospect, behind Matt Sweeney.

In 2008, Schoop hit .246/.305/.349 for the San Jose Giants. He made the Dutch national team for the first time in the 2009 World Baseball Classic. He started the Classic as the second baseman for the Netherlands but moved to shortstop when Hainley Statia got hurt early in the tourney. Schoop fielded well, but struggled at the plate, going 1 for 21 with a walk, 2 runs, a RBI and 7 strikeouts. In game one against the Dominican Republic, he bunted into a Miguel Olivo error and came around on a Sharnol Adriana hit in the first as part of a 3-2 upset win. His only hit was a single off Brad Ziegler of Team USA; he scored on a double by Yurendell de Caster. Later in the game, Schoop hit a sacrifice fly off Matt Lindstrom to score Danny Rombley, but the Dutch lost and were eliminated.