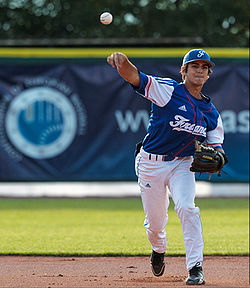 Regarded as one of the best players in France, infielder Maxime Lefevre has played for the Cougars de Montigny and the Rouen Huskies in the French Division 1. In 2013 Lefevre played professionally for the Quebec Capitales of the Can-Am Association before returning to play in France.

Lefevre grew up in the Parisian metropolitan area before moving to Rouen to continue his baseball career. Before moving to Rouen, Lefevre played for several French junior national teams. In 2008 he was a member of the under-21 team that finished 6th in Europe. Lefevre was named to the All-Star team for that tournament. He played in the Kenko World Championship in 2006, and played in the MLB International tournaments in Tirenia, Italy in 2008 and in Toulouse, France in 2009.

In 2010 Maxime Lefevre decided to join the Rouen Huskies, where he would end up winning the 2010 French Championship. During the regular season Lefevre batted just .189 in 16 games. In September 2010, Lefevre played for the French National team in the European Championships, where France finished 6th.

In 2011 Lefevre again won the French Championship with Rouen, in addition, the Huskies took home the 2011 Challenge de France. Lefevre played only in 4 regular season games as he missed time with a broken hand. In the fall of 2011 he made the move to Cochise College in Arizona where he excelled in his two seasons at the junior college.

The 2012 season was a very successful one for Maxime Lefevre. The Rouen Huskies dominated the French D1, finishing 26-2 in the regular season, winning both the Challenge de France and the French championship. Lefevre was a key part of the team when not playing college ball in the US. Following his second season with Cochise College, Lefevre played for the St. Josephs Mustangs in a wooden bat league in Missouri. When he returned from the US, Lefevre joined his Rouen teammates in the 2012 European Cup Final 4, a first for any French club. Rouen ended up finishing 4th in Europe.

In September 2012, Lefevre laced up the spikes for the French national team yet again. The French squad finished a disappointing 8th in the 2012 European Championships in Holland. A week later, Lefevre joined "Les Bleus" at the World Baseball Classic Qualifiers in Jupiter, FL. Lefevre was France's starting shortstop. France fell to Spain and South Africa in their two contests.

The 2013 season saw Lefevre make the jump to the Quebec Capitales of the Can-Am Association. Lefevre played infield and outfield for the Capitales, appearing in 73 games, posting a .224/.348/.302 line while stealing 20 bases. Quebec ended up winning the league championship. In September 2013, Lefevre rejoined his Rouen club to play in two key games versus Moscow and Antwerp, two games which Rouen won which qualified them for the 2014 European Cup.

2014 saw Lefevre decide to spend the entire season with the Rouen Huskies. In the regular season Lefevre finished second on Rouen in batting average with a .370 clip to go along with 12 stolen bases. In the Challenge de France he batted .417 in three games. In the 2014 European Cup hosted in Hoofddorp, Rouen went 3-2, with wins over Nettuno, Solingen and Prague. Rouen fell to a strong Paris Université Club team in the semi-finals, snapping a nine-year streak as French champions. Overall in 2014 for Rouen, Lefevre played in 32 games, batting .321 (42-for-131) with 20 RBI and 16 stolen bases.

In September 2014 Lefevre played for a much improved French national team. Under head coach Eric Gagné, Lefevre and his teammates pulled off a shocking upset of the Netherlands in the inaugural Yoshida Challenge, hosted by France. Lefevre excelled in the tournament, winning the award given to the top hitter, as he batted .643 (9-for-14) with 7 runs scored and 3 stolen bases. France then headed to Germany and the Czech Republic to take part in the 2014 European Championship. Lefevre played second base and third, moving over from his customary spot at shortstop. In the Euros, Maxime batted .250 (8-for-32) with 6 runs scored and 5 stolen bases for a French squad which finished in 6th place. He tied Matej Hejma, Kalian Sams and Juan Carlos Infante for the tourney lead in steals.

Lefevre now works year round alongside Rouen pitcher Owen Ozanich and manager Keino Perez at the newly created Normandie Baseball Academy. In 2015, he was one of the top stars in the French Division I. He hit .407/.523/.559 with 37 runs in 32 games, stealing 22 bases in 25 tries. He led the league in runs (4 ahead of Luc Piquet), OBP, walks (34, 13 more than anyone else), steals (4 ahead of Felix Brown) and sacrifice flies (6, tied) and was also tied for second with 48 hits (even with Larry Infante and Jacques Boucheron, tied Alan Fanhoni for second with two homers, 3rd in average (behind Douglas Rodriguez and Fanhoni), 3rd in total bases (66, behind Rodriguez and Larry Infante), 4th in slugging and 5th in RBI (23).

In March 2016, he started at 3B for France in the 2017 World Baseball Classic Qualifiers. He was just 1 for 11 with two walks, a caught stealing and a triple (off Luis Machuca).