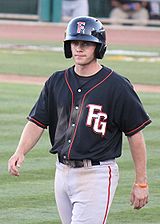 Skyler Stromsmoe has played as high as AAA despite having been undrafted out of college.

In 2007, Stromsmoe stole 52 bases in 55 tries for Southern Arkansas University. He was second in NCAA Division II in swipes, leading the Gulf South Conference and setting a school record. The San Francisco Giants signed him as an undrafted free agent. In his pro debut that summer with the AZL Giants, the utility man hit .290/.429/.435 in 28 games, stealing 7 bases in 8 tries and appearing at five positions. He split 2008 between the Salem-Keizer Volcanoes (11 for 44, 5 BB, 3 SB, CS) and Augusta Greenjackets (11 for 55, 10 BB, 2 SB, CS), getting no hits longer than a single. He only played 2B, SS and 3B that year.

Finally spending one season with a single team, Stromsmoe put up a .277/.365/.349 batting line for Richmond in 83 games in 2011. After having started his pro career 25-for-29 in steal attempts, he was a woeful 3-for-9 in '11. He allowed three runs in four innings and appeared at every position except catcher. His most regular position was shortstop, where his 33 games were third on Richmond behind Noonan and Sharlon Schoop. Like Schoop, Stromsmoe was picked to play in the 2011 Baseball World Cup - Sharlon for the Netherlands and Skyler for Team Canada. They both earned medals as well; Schoop got the Gold and Stromsmoe the Bronze. As Canada's starting second sacker, hit .143/.268/.171 and fielded .957, scoring six runs in 10 games though and stealing four bases in four tries. He tied Jordan Danks for the tourney lead in swipes. In the 2011 Pan American Games, he batted .200/.261/.400 and played error-free defense at second as Canada won their first Gold ever in baseball at a Pan American Games. The 2011 Canadian National Team would be inducted into the Canadian Baseball Hall of Fame.

He was back with Team Canada for the 2015 Pan American Games, again serving as their starting second baseman. He hit .208/.406/.417 with five runs in eight games, handling 32 chances without an error. He broke a scoreless tie with Cuba in the 6th when he scored off Yoannis Yera on a Tyler O'Neill homer. In the round-robin match with Team USA (Canada's lone loss), he drove in Canada's only run, doubling off Nate Smith to plate Rene Tosoni. In the Gold Medal game against the US, he hit 9th and played second, going 0 for 4. He came up big in the 10th, though. With Canada down 6-4, he was one of the starting baserunners under the IBAF Extra Innings Rule, starting off on 1B. He advanced on an Orr single. When US hurler David Huff made an error on a pickoff attempt, Stromsmoe dashed home with the tying run; Orr soon followed him there as US right fielder Brian Bogusevic made an error on the return throw from the outfield. That made Canada the second country (following Cuba) to win multiple baseball Golds in the Pan Ams.