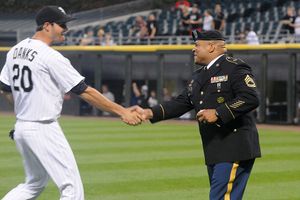 The brother of John Danks, outfielder Jordan Danks reached the majors with the Chicago White Sox in 2012.

Like his brother, Danks starred in high school, hitting .486/?/1.105 as a senior with 18 steals and 42 runs in 76 games. He was a second-team Baseball America High School All-American and deemed to be a possible first-round draft pick like John. He decided instead to go to college but was chosen by the Chicago White Sox anyways in the 19th round of the 2005 amateur draft.

As a freshman at the University of Texas, Jordan hit .319/.490/.684 and led the team in slugging. Collegiate Baseball named him a first-team freshman All-American though Baseball America did not rate him either first- or second-team.

Danks played for Team USA in the 2007 Pan-American Games. The leadoff hitter and center fielder, he went just 3-for-19 with 6 strikeouts but did draw 5 walks and scored a tournament-leading 7 runs while playing error-free ball for the Silver Medal winners. In the 2007 World Port Tournament, he hit .419/.500/.645 with 8 runs in 8 games and won the World Port Tournament Best Rookie award. He tied Yosvani Peraza for second in average behind Alfredo Despaigne, led in OBP and was 5th in slugging. He tied José Julio Ruíz for second in runs, three behind leader Hector Olivera.

Baseball America rated Danks the best college athlete entering the 2008 amateur draft, but he was not taken in the first day's picks (6 rounds). The White Sox took him in the 7th round of the draft; his agent Scott Boras said he would be asking for first-rounder money. On June 9, 2008, the Danks family announced that both John and Jordan would be dropping Boras as their agent in favor of Jeff Berry. Danks signed with scouts Keith Staab and Derek Valenzuela right before the deadline.

Danks started 2012 back with Charlotte and hit .302 with 8 homers in 57 games there. In early June, he was called up to the White Sox when Kosuke Fukudome went on the disabled list, and he made his big league debut against the Toronto Blue Jays on June 7th, appearing as a pinch runner. He played left field and got his first plate appearance the following day versus the Houston Astros, singling off Wesley Wright in the 8th inning for his first big league hit. He made his first major league start on June 9th, also against the Astros, and went 2-for-5 while scoring twice. His first major league homer was a key one, giving the White Sox a walk-off win over the Oakland A's on August 10th. He hit it with two outs on the bottom of the 9th off Pat Neshek to give the White Sox a 4-3 win. Overall, he hit .224 in 50 games, gathering only 67 at-bats as he was mainly used as a defensive substitute in the outfield. In 2013, he played 54 games at Charlotte, hitting .279 with 6 homers and 28 RBI. he had started the year with the White Sox, but was sent down in early May when he was hitting only .200 in very limited playing time. He then was on a shuffle between AAA and the majors, retirning to Chicago for most of June, but going back down again on July 4th. he came back to stay on July 31st. Overall, he played 79 games with the White Sox, hitting .231/.313/.369 with 5 homers and 12 RBI in 179 at-bats; he got an opportunity to start more often, first in right field, and then in center field down the stretch, after the trade of Alex Rios to the Texas Rangers.

Jordan was back in AAA at the start of 2014, but that did not last long, as he was called up on April 10th when RF Avisail Garcia went down with a season-ending shoulder injury.