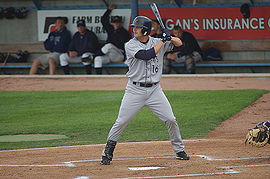 Rene Tosoni was the MVP of the 2009 Futures Game and made his major league debut in 2011.

Tosoni graduated from high school in 2004, where he also played hockey and volleyball. He represented his country in past competitions, playing for Canada's Junior National Team in 2003 and 2004. After a year of junior college, he was a draft-and-follow 36th-round pick for the Minnesota Twins in the 2005 First-Year Player Draft. He was signed in 2006 by scout Jim Ridley, but visa restrictions prevented him from starting his pro career, so he worked out at the Twins' Dominican complex instead.

Tosoni began his professional career in 2007 and hit .301/.407/.428 for the Elizabethton Twins. He ranked third in runs (58, only 2 shy of the co-leaders) and OBP (.407) in the Appalachian League and was 10th in average. He was named to the Appalachian League All-Star Team as the utility outfielder. He helped his team post the best record of the regular season. His 9 assists tied Wilson Tucker for the lead among Appy League outfielders. He also went 3 for 11 for the Beloit Snappers that year.

In 2009, Tosoni hit .271/.360/.454 with 15 home runs for the New Britain Rock Cats. He had 11 outfield assists. Chosen for the 2009 Futures Game, he starred, winning the Larry Doby Award as MVP. With the World Team down 4-3 in the 7th and final inning, Tosoni pinch-hit for Alex Liddi with two outs and the tying run aboard in Alcides Escobar. Facing Brad Lincoln, Rene doubled to right, scoring Escobar. Dayán Viciedo doubled home Tosoni with the go-ahead run as the World team went on to victory.

He joined Team Canada for the 2009 Baseball World Cup. As their starting right fielder, he batted .345/.457/.690 with 18 runs and 16 RBI in 15 games as Canada won their first Bronze ever at a Baseball World Cup. He had 5 RBI in a win over Sweden and threw out Ikuhiro Kiyota at home in the 8th to preserve a tie in an eventual win over Japan. In the Bronze Medal Game, he went 0 for 2 with two walks and two runs as Canada's #2 batter in a 6-2 win over Puerto Rico. Tosoni led the event in runs and trailed Rene Reyes, Justin Smoak, Terry Tiffee and Alfredo Despaigne in RBI. He was left off the All-Tournament team as Despaigne, Jon Weber and Miguel Abreu were picked in the outfield. Tosoni had a better OPS than Abreu and more runs produced than Weber.

For the 2013 World Baseball Classic, Michael Saunders joined Canada's lineup (he had been unable for the qualifiers) in RF, moving Adam Loewen to LF and Tosoni to the bench. He got into only one game, pinch-running for Jimmy Van Ostrand in a win over Mexico. In his only plate appearance, he was plunked by Arnold León; that led to a bench-clearing brawl in which both Tosoni and León were ejected.

Tosoni joined fellow Canadian national team member Tim Smith on the Perth Heat for the 2014-2015 Australian Baseball League - he hit .290/.395/.435 in 18 games. With Sioux City in 2015, he split 1B and DH with another Team Canada player, Brock Kjeldgaard. He hit .433/.500/.600 as Canada's starting right fielder in the 2015 Pan American Games, with seven runs and six RBI in eight games. He had four hits in a win over Nicaragua and scored the only run in Canada's lone loss (4-1 to Team USA in the round-robin, against Nate Smith, driven in by Skyler Stromsmoe). In the Gold Medal game against the USA, he came up huge - with Canada down 3-0 in the third, he hit a three-run homer off Josh Hader; Canada rallied to win 7-6 and become only the second team to win multiple (let alone consecutive) Pan American Games Golds in baseball. He was third in the event in average, behind Rudy Reyes and Pedro Feliz, tied for 10th in RBI and tied for fifth in runs.

Tosoni became a coach with the Florida Fire Frogs in 2018.