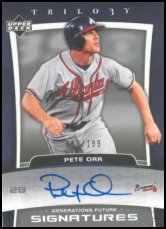 Pete Orr was a prototypical utility player, being able to play both the infield and the outfield, although his most common position was second base. He played in over 100 games for the Atlanta Braves in both 2005 and 2006, barely reaching 100 at-bats each year. He was used very rarely as a starter, getting most of his playing time as a pinch hitter, pinch runner or defensive substitute. He only played in 57 games for the Braves in 2007 before finishing the season with the AAA Richmond Braves. His batting average had fallen from .300 to .253 to .200 over the course of those three years. He was released by the Braves after the season and found work with the Washington Nationals in 2008, hitting .253 in 75 at-bats while also spending time with the AAA Columbus Clippers.

In contrast to his major league career, Orr has been a starter for Team Canada over the years, taking advantage of the shortage of quality middle infielders produced by the country. He played in the 2004 Olympics and the 2006 World Baseball Classic, and was Canada's starting second baseman in the 2009 World Baseball Classic and 2013 World Baseball Classic. In the 2015 Pan American Games, the veteran played a huge role while starting at third for Canada. He hit .353/.398/.471 with 6 runs and eight RBI in 8 games, finishing 10th in average and tying Tyler Pastornicky for third in RBI (behind only Anthony García) and Jordan Lennerton). The 36-year-old also stole three bases to tie Aneury Tavárez for the event lead. In the Gold Medal game, he really shone, going 3 for 6 with 3 runs and a RBI to lead Canada to a 7-6 win over Team USA and join Cuba as the only team to win multiple Golds in baseball in the Pan American Games. With the score 3-3 in the 5th, he singled off Buddy Baumann, stole second, took third on a throwing error by Tommy Murphy and scored on a fly from Lennerton. In the 10th, with the hosts down 6-4, two on and one out, he singled off David Huff to score Tyson Gillies. Huff tried to pick off Orr, but the throw went in to right field; the throw from Brian Bogusevic in right also went wild and old-timer Orr scampered all the way home for a dramatic game-ending and Gold Medal-winning run. He made one final appearance for Team Canada in the 2017 World Baseball Classic.