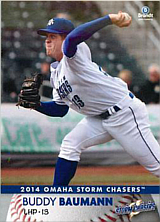 Reliever Buddy Baumann began his professional career in 2009 and reached the majors in 2016.

Baumann was 3-3 with a 2.83 ERA as a high school sophomore, 2-2 with a 2.17 ERA as a junior and 10-2 with a 1.43 ERA and 143 strikeouts in 78 innings as a senior, earning All-State honors in Illinois. He had a 4.85 ERA and .218 opponent average as a college freshman. He was 5-1 with a 2.47 ERA for the St. Cloud Riverbats that summer, winning All-Star honors. He had a 6-4, 4.66 record as a sophomore. With the Brewster Whitecaps, he went 4-1 with a 2.35 ERA, finishing 8th in the Cape Cod League in ERA, between Nick McCully and Bryce Stowell. He was 11-1 with a 3.23 ERA and 101 strikeouts in 86 1/3 innings as a junior, becoming the third pitcher in school annals to post a 11-win season. He led the Missouri Valley Conference in wins and was second in strikeouts, winning MVC Pitcher of the Year honors. He tied for 10th in NCAA Division I in wins and tied for 32nd in strikeouts. He was named second-team Collegiate Baseball All-American behind Stephen Strasburg, Mike Leake, A.J. Morris, Louis Coleman, Deck McGuire, Daniel Bubona and Addison Reed.

Baumann became a free agent following the 2015 season, but was signed by the San Diego Padres to a major league contract. He was injured entering the 2016 campaign, having been placed on the 60-day disabled list on April 20. Activated, he joined the El Paso Chihuahuas and did well (1-0, a save, 1.06 in 13 games, 9 hits in 17 innings) to earn his first trip to the big leagues after the Padres dealt Drew Pomeranz away. In his MLB debut, he relieved Luis Perdomo in the top of the 5th with a 5-3 lead, two outs and a man on second. He retired Brandon Crawford on a grounder, then was relieved by Carlos Villanueva to open the 6th. He spent parts of three seasons with the Friars and was designated for assignment in April 2018, catching on for a cameo with the New York Mets. While pitching for the Lancaster Barnstormers of the Atlantic League, Buddy announced his retirement in August 2019.