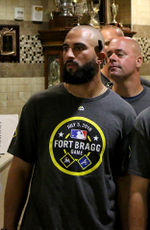 Pitcher Ian Krol was a 7th-round selection by the Oakland Athletics in the 2009 amateur draft out of a high school in Illinois. He was signed by scout Kevin Mello for $925,000 and pitched four times that season, going 0-1, 6.23 in only 4 1/3 innings split between two teams. His true professional debut was in 2010, when he made 28 starts with two teams, the Kane County Cougars of the Midwest League and the Stockton Ports of the California League. Overall, his record was a solid 10-4, 280 in 138 1/3 innings pitched; he was a mid-season All-Star in the Midwest League and held his own in the California League at age 19, a good marker for future success. However, the following season, 2011, was marred by an injury, and he ended up back with the AZL Athletics for only 5 innings of work. He was back playing full time in 2012, but the results were disappointing: he was 2-9, 5.20 in 29 games, going 1-7 as a starter for Stockton, and then 1-2 with a 5.06 ERA in 8 relief appearances for the Midland RockHounds of the AA Texas League.

Things moved very quickly for Ian in 2013 though. After going to spring training with the A's minor leaguers, he was sent to the Washington Nationals on March 20th, as the player to be named later in a three-team trade that had sent OF Mike Morse from the Nsts to the Seattle Mariners earlier that off-season. Krol found himself pitching in relief for the Harrisburg Senators of the AA Eastern League at the start of the season, and he was outstanding, with an ERA of 0.69 in 21 outings, covering 26 innings, during which he allowed only 14 hits while striking out 29 opponents. Just like that, he got a call to the Show in early June and made his big league debut on June 5th, pitching in relief against the New York Mets; he gave up only one hit in his inning of work that day, getting all three outs on strikeouts, and would stay with the Nats until the middle of August. He made 27 appearances with a 3.24 ERA during that stretch, pitching mainly in middle relief. His first big league win came on July 25th against the Pittsburgh Pirates: the Nationals had entered the 9th inning with a 7-3 lead that day, but closer Rafael Soriano imploded, letting four of the first five hitters he faced reach base. The lead had been cut to 7-5 when Krol relieved Soriano, and he allowed the tying run to score before getting out of the inning, but Bryce Harper hit a walk-off, two-run homer in the bottom of the inning to gift him the win. Krol pitched 5 times for the AAA Syracuse Chiefs in late August, then returned to the Nation's capital when rosters expanded in September. He made another 5 appearances, but was inefficient, giving up 3 runs in 2 1/3 innings to end the season at 2-1, 3.95 in 32 games. It was clear that he tired as the season went on, not a surprising development given it was his first season as a full-time reliever: his ERA over the second half was 6.57, after being under 2.00 in the first half.

On December 2, 2013, Krol was traded to the Detroit Tigers along with IF Steve Lombardozzi and minor league P Robbie Ray in return for P Doug Fister. He pitched 45 games for the Tigers in 2014, with no record and a save, with a 4.96 ERA in 32 2/3 innings. He did not pitch in the postseason. In 2015, he made 33 appearances, but struggled with his control, with a record of 2-3, 5.79 and 17 walks in 28 innings against 26 Ks. On November 20th, he was traded to the Atlanta Braves along with P Gabe Speier in return for OF Cameron Maybin.