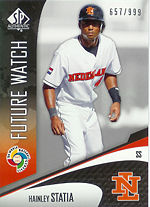 Hainley Statia is a player in the Milwaukee Brewers system and has played for the Dutch national team in several events.

Statia was drafted in the 9th round of the 2004 amateur draft by the Los Angeles Angels of Anaheim. He was signed by scout Mike Silvestri and debuted professionally in 2005, hitting .300/.360/.426 in 68 games for the Orem Owlz and .245/.286/.292 in 23 contests with the Rancho Cucamonga Quakes. He led Pioneer League shortstops in fielding percentage (.959), putouts (116), assists (238) and double plays (43). In the final playoff game, he scored the winning run in the 9th inning. Baseball America rated him as the #3 prospect in the Pioneer League behind Jay Bruce and Charlie Fermaint.

The switch-hitter debuted with the Dutch national team for the 2006 World Baseball Classic. He backed up Raily Legito at shortstop. Against the Cuban national team, Statia replaced Yurendell de Caster at second base and was 0 for 1. He started ahead of Legito against the Panamanian national team, batting 9th and going 2 for 4 with a run and two RBI.

In the 2007 European Championship, he hit .429/.474/.571 with 13 runs in 8 games for the Gold Medal-winning Dutch team. He was third on the club in average behind Roger Bernadina and de Caster and second to Bernadina in runs. Brant Ust of Great Britain beat him out for All-Star honors at shortstop for the event.

Statia batted .242/.282/.336 with 8 steals in 12 tries in 59 games for the Arkansas Travelers but injured his hamstring twice and missed the 2008 Olympics; he had been projected to be the starting Dutch shortstop. Statia was on the Dutch team at the start of the 2009 World Baseball Classic and went 0 for 4 before re-injuring his hamstring after two games; he was replaced on the roster by Dwayne Kemp.

2011 found Statia playing for the Huntsville Stars in the Milwaukee Brewers' system.

Statia became a hitting coach with the AZL Brewers in 2016 and Wisconsin Timber Rattlers in 2017-2018.