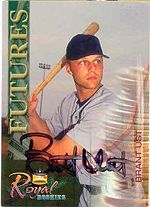 Brant Ust last played in 2007 in AAA, his 9th year in the minor leagues. Ust is a former Big East Conference Player of the Year and US national team member. He was the MVP of the 2007 European Championships, playing for Great Britain.

Ust spent the first ten years of his life in Europe, first in his native Belgium, then in Italy and in his mother's native England. He did not see many baseball games despite the abundance of low-level teams and the presence of former major leaguers in Italy's Serie A1.

The Usts moved to the Pacific Northwest in the late 1980s when Brant's father got a job for Boeing as a contractor. Brant got to see many games at the Kingdome, where he became a fan of Edgar Martinez.

Ust was a football, basketball and baseball player in high school, manning third base, shortstop, second base, catcher and center field in the latter sport. The New York Yankees selected him in the 11th round of the 1996 amateur draft but he did not sign.

In 1997, Ust hit .372/.428/.623 with 66 runs and 54 RBI as a freshman. He was named the Big East Conference Rookie of the Year and was named to the All-Conference team at second base, the only freshman picked for All-Conference honors. Baseball America named him to their All-Freshman team, but at third base rather than second base. He spent the summer with the Harwich Mariners.

Ust was even better in 1998. He batted .373/.424/.724. His 18 home runs led the Big East and he was named Player of the Year, beating out the likes of ERA leader Aaron Heilman and Pitcher of the Year Brad Lidge. Ust was All-Conference at third base and was named third-team All-American by Baseball America, joining Bobby Hill and Willie Bloomquist as the infielders.

Ust joined Team USA that summer and hit .378 while slugging .555. Only Ryan Ludwick had a better average among those with 90+ AB. In the 1998 Baseball World Cup, Ust batted .333/.375/.400 but had crucial two-run throwing errors in 3-1 losses to the Dutch national team and South Korean national team and the USA finished 9th out of 16.

By this time, Ust had finished college, having gone to class in the off-seasons and earning a degree in business marketing.

Ust led the Tigers organization with 36 doubles in 2003. He hit .286/.320/.472 in 45 games for Erie and made it to AAA with the Toledo Mud Hens, contributing a .253/.297/.402 batting line in 86 contests as the primary third baseman. He led the International League's third basemen with 26 double plays despite spending only part of the year with Toledo.

Released by Detroit, Ust signed with the Boston Red Sox. They sent him all the way back to A ball with the Wilmington Blue Rocks, where he mostly played the outfield. He batted .262/.312/.395 and tied for the team lead with 13 home runs while driving in 71, the most on the club. He also struck out the most - 107 times. Ust returned to Team USA as their second baseman for the 2005 Baseball World Cup but hit just .231/.286/.385 and the US failed to make the Medal round.

Brant signed with the Seattle Mariners for 2007. It was his first time in the Pacific Northwest in 10 years, since his high school days. He got to act as the Tacoma Rainiers's guide to the area where he had spent so many years. Used as a utility man, Ust hit .245/.299/.364 in 49 games and even worked as an "extreme emergency pitcher", allowing four runs in one inning of work on April 9.

Ust joined the Great Britain national team for the 2007 European Championships and dazzled, winning the MVP award and helping a usually uncompetitive British team finish in second place. Ust hit .623/.692/1.032 with 7 doubles, 12 runs and 11 RBI in 8 games. In the final round, he batted .608/.680/.950 and led in average, slugging, hits (12) and doubles (4) in five games. He was second to Roger Bernadina in OBP, tied for third in RBI (7) and tied for third with Yurendell DeCaster for third in runs (8).

In 2008, Ust played briefly for Grosseto in Italy, going 5 for 21 with a walk, double, homer and 6 strikeouts. He was an assistant coach at the University of Michigan in 2009.

In 2010, Ust was hired by USA Baseball as Director of Alumni Relations.

Ust is co-partner in a company called Lacers, which produces an attachment that helps to tie shoes.