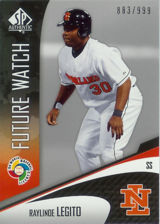 Infielder Raily Legito has been a mainstay of the Dutch national team in the early part of the 21st Century, having played in three Olympics and many other events. Legito has also been a top player in the Dutch leagues. His son Raydley Legito made his Dutch debut in 2020.

In 2000, he tied Robert Eenhoorn for second in Hoofdklasse in runs (38), trailing only Elston Hansen and ranked 4th with five home runs. He was 2 for 11 with 4 walks and 3 runs in the 2000 Haarlem Baseball Week and won the Best Defensive Player Award in the event. In the 2000 Olympics, Legito was one for ten with two walks and made two errors in ten chances at third base; the only Dutch player to fare as poorly was the other third baseman, Evert-Jan 't Hoen.

Legito was not as effective in Hoofdklasse in 2003, only ranking among the league leaders in stolen bases (third with 19, while only being caught once). Legito was 5 for 28 with four walks and an error in the 2003 European Championship yet was still picked for the tournament All-Star team at shortstop. He again failed to hit in the major international event of the year, producing at a .136/.182/.296 line in the 2003 Baseball World Cup. In the 2003 World Port Tournament, Legito hit .419/~.447/.514 with a tourney-leading nine runs in nine games. He was named the World Port Tournament MVP for his efforts.

Legito moved to DOOR Neptunus in 2004 and helped them to the Hoofdklasse title. He hit .326 (7th in the circuit), had 47 hits (4th-best), smacked 13 doubles (most in the loop), tied for 6th in home runs (2), rapped 33 RBI (third behind Gregory Halman and Dè Flanegin) and stole 11 bases, tying for third and trailing Michael Duursma and Ralph Milliard. He was 5 for 18 with 9 walks in 2004 Haarlem Baseball Week, tying Takashi Yoshiura for the walk lead. In the 2004 Olympics, Raily was 1 for 17 with 3 walks and 7 strikeouts. He also had two errors in six games at shortstop in yet another poor international performance.

Legito hit .343/.390/.466 in 2005 as Neptunus won another title. He was 5 for 12 with 4 walks and 3 doubles in the Holland Series that season. He was fifth in the league in average, tied Harvey Monte and Danny Rombley for second with 35 runs (trailing Dirk van 't Klooster), was third in hits (61), tied van 't Klooster for the doubles lead (15), ranked third in RBI (32, trailing 't Hoen and van 't Klooster) and was 4th with 11 stolen bases. Legito tied Marvin Appiah, Jamel Boutagra and Fernantez Rompert Kalnteron for the lead in the 2005 European Championship with four doubles. He hit .303/.485/.400 with 9 runs in 9 games. He won the Best Defensive Player Award for the event, fielding perfectly at shortstop. He hit .361/.465/.500 with 9 runs in 11 games in the 2005 Baseball World Cup, as the Netherlands finished 4th, their highest ever to that point.

Legito started 2006 with the first World Baseball Classic. He hit .400/.571/.600 for the best OPS on a Dutch team that included Andruw Jones, Randall Simon and three other players with MLB experience. He tied for the team lead in runs (2) and extra-base hits (one). In a 8-3 loss to Puerto Rico, he was 2 for 3 with a walk, run, RBI and a double off of Willie Collazo. He did make one error at shortstop in an otherwise fine game. He was 0 for 2 with a walk and a run in their loss to the Cuban national team. He sat out against Panama as backup Hainley Statia got the call at shortstop.

Legito hit .329/.441/.457 in the 2007 Hoofdklasse campaign. He finished 9th in OBP, tied for 10th in RBI (27), tied Denny Beljaards for 8th in doubles (10) and tied Ronald Jaarsma and Balentina for the most stolen bases (16, while only being caught twice). Legito hit .423/.515/1.038 in the 2007 European Championship with 4 homers and 15 RBI in eight games to help the Netherlands clinch a spot in the 2008 Olympics. He made the tournament All-Star team at 3B (Statia manned short). He tied Yurendell DeCaster for the most RBI on the championship team and was second to Roger Bernadina in slugging. Legito was just 7 for 35 with a double, no walks and two errors in the 2007 World Port Tournament.

In the 2007 Baseball World Cup, Legito hit .310/.383/.333. Against Australia, he singled off of Brendan Wise to open the 9th and scored to put the Netherlands ahead 3-2 but Michiel van Kampen failed to hold on. He had a big role in the Dutch 2-1 win over the Cuban national team; he led off the 8th with a fly to left against Jonder Martinez that Frederich Cepeda lost in the sun for a single. Legito advanced on a wild pitch then raced home on a single by Sharnol Adriana, showcasing his speed. Legito had played in the prior Dutch win over Cuba, in the 2000 Olympics. He had a big RBI double off of En-Yu Lin in the quarterfinal win over the Taiwanese national team and added the go-ahead sacrifice fly in the 11th off of Po-Hsuan Keng. He came the closest to scoring in the semifinal loss against Team USA, reaching third against Matt Wright before getting stranded. In the Bronze Medal game, he had one of two Dutch hits in a loss to Japan and made a fine defensive play.

Legito hit .429/.591/.929 with 6 walks, 4 doubles, 7 runs and 7 RBI for Neptunus in the 2008 European Cup in Regensburg. He might have led the tournament in OPS. He tied Giuseppe Mazzanti for the lead in two-baggers. Legito continued his Olympic struggles in the 2008 Summer Games, going 1 for 15 with a walk, splitting DH duties with Percy Isenia. That made him just 3 for 42 in his 3 Olympic appearances.

Legito was not with the Netherlands for the 2009 World Baseball Classic, the first major event he had missed for some time.