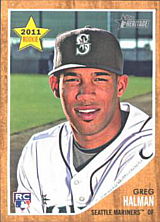 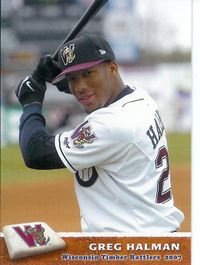 Greg Halman was the Hoofdklasse MVP in 2004 and the Seattle Mariners minor league MVP in 2008. He was the son of Eddy Halman and the brother of Jason Halman. He made his major league debut at the tail end of the 2010 season before meeting a tragic end in November, 2011.

Gregory spoke four languages (Dutch, Spanish, English, Papiamento), but had some trouble getting passing grades in school as his attention was focused on baseball. He debuted professionally at age 16, making a splash. Playing for Kinheim, he led Hoofdklasse Honkbal with six triples. He was signed by the Minnesota Twins but the contract was dissolved at his request.

The next year, he was even better, almost winning a Triple Crown. He hit .3576, .0034 behind leader Sidney de Jong and also trailing Dirk van 't Klooster by .0008 and Brian Larmonie by .002. He was 6th in runs scored (28), second in hits (54, three behind van 't Klooster), tied four others for the triples lead (4), tied Bryan Engelhardt for the home run lead (4) and drove in 41, 3 more than runner-up Dè Flanegin. For his efforts, the first baseman won the MVP Award and the Ron Fraser Award. He hit for the cycle as well, against Sparta/Feyenoord, on May 15. Seven MLB teams bid for his services and he chose the Seattle Mariners and scouts Peter van Dalen, Wayne Norton and Bob Engel, who offered a 7-year deal.

Gregory struggled in his first full-season minor league stop. He hit .182/.234/.273 for the Wisconsin Timber Rattlers with 8 walks and 77 strikeouts in 187 at bats. He had stolen 15 bases in 22 tries to tie him for 8th in the MWL but he was third in strikeouts, two away from the lead. When short-season play began, he was sent back to Everett. He hit .307/.371/.597 with 16 homers in 62 games there, though he struck out 82 times in 238 at bats. He led the Northwest League in slugging, was second in strikeouts and homers (one behind leader Ian Gac), tied for 6th in stolen bases (16 in 24 tries) and was 8th in average. The next-closest player in slugging percentage was 52 points behind. He also led NWL outfielders with a .990 fielding percentage. He made the league All-Star team. Halman finished tied for 4th in the affiliated minors with 162 strikeouts, tying Chris Dickerson. Baseball America rated him the 8th best prospect in the Northwest League that season.

In the 2007 European Championship, Halman batted .357/.438/.429 for the Gold Medal Dutch team that qualified for the 2008 Olympics with the title. Halman hit .214/.353/.286 for the Netherlands in the 2007 Baseball World Cup and struggled in the field, with two errors in 16 chances. He had two other miscues that went for a double and a triple, one because he was not wearing sunglasses during a day game. He did help out by doubling in the winning run in the 11th inning against the host Taiwan national team in the quarterfinals.

Greg split center field duties for the Dutch team in the 2009 World Baseball Classic with Eugène Kingsale. He struggled in the event, going just 1 for 11 with a run, a double play ball and 9 strikeouts as the worst hitter on the Dutch squad. Greg tied Yurendell de Caster for third in the tourney in strikeouts, one behind Adam Dunn and Michihiro Ogasawara. Greg scored the only Dutch run in their 3-1 loss to Puerto Rico, doubling off Ian Snell and scoring on a hit by de Caster.

Halman's woes continued into 2009. At age 22, he hit .210/.278/.420 for the West Tenn Diamond Jaxx with 25 home runs but 183 strikeouts in 457 at bats. He tied David Cook for the Southern League lead in homers, but also led in strikeouts. He led the entire minor leagues in strikeouts. He made the SL All-Star team at DH.

When Halman came to the majors in late September 2010, after guiding his team to the Pacific Coast League title, he became the 5th Dutch born-and-raised player to appear in the majors. He followed Win Remmerswaal, Rikkert Faneyte, Robert Eenhoorn and Rick Vanden Hurk. There had been others born in the Netherlands (most notably Bert Blyleven) or raised there (Roger Bernadina, Ralph Milliard) as well. He had hit 33 homers in 112 games for the Triple A Tacoma Rainiers before getting the call, batting .243 but slugging .545. He struggled against major league pitching, being limited to a .138 batting average in 9 games.

Halman split time again between the Mariners and the minor leagues in 2011. He hit .230 with his first two big league homers in 35 games for Seattle after batting .299 in 40 games for Tacoma. Injuries limited his playing time and sapped his power, as he hit only 3 homers in Triple A. He returned home to the Netherlands in the offseason. In early November, he participated in the second European Big League Tour (also having taken part in 2010). Along with fellow Dutch major leaguers Rick Vanden Hurk and Roger Bernadina and MLB stars Prince Fielder, Dexter Fowler, Adam Jones and Mike Stanton), he conducted clinics for young baseball players in the Netherlands, Czech Republic and Italy.

On the morning of November 21st, Dutch police were called to his home in Rotterdam and found him bleeding from a stab wound. They were unable to revive him and he died soon after. His brother Jason was arrested in relation with the murder, although police refused to confirm immediately that he was the main suspect. The source of the altercation was apparently a dispute over playing music too loudly, which had degenerated. Jason faced trial for the murder the following August, at which point prosecutors and lawyers for the defense agreed to have the charges reduced to manslaughter. He was formally acquitted on August 30th by the Rotterdam District Court, which stated that Jason was in a state of psychosis at the time of the stabbing and could therefore not be held accountable for his actions.

When news of the tragic event became public, tributes to the young outfielder poured in, emphasizing his dedication to the game and his work as a spokesman for baseball in the Netherlands and Europe. Mariners Chairman Howard Lincoln, team President Chuck Armstrong and GM Jack Zduriencik issued a joint statement saying: "The Mariners family is deeply saddened by the tragic death of Greg Halman. Greg was a part of our organization since he was 16 and we saw him grow into a passionate young man and talented baseball player. He had an infectious smile that would greet you in the clubhouse, and he was a tremendous teammate. Our thoughts and prayers go out to Greg's family." For his part Commissioner Bud Selig added: "Today Major League Baseball mourns the passing of Greg Halman, a member of the Seattle Mariners organization since 2004. Greg reached the Major Leagues in each of the last two seasons, hitting his first career home run on June 15 of this year. Greg proudly represented the Netherlands in the 2009 World Baseball Classic, and he was a participant in MLB International's grassroots clinics in Europe, as recently as earlier this month. The loss of a talented 24-year-old young man like Greg, amid such tragic circumstances, is painful for all of us throughout the game. On behalf of Major League Baseball, I send my deepest condolences to the entire Mariners organization and to all those whose lives were touched by Greg." Former major leagues Bert Blyleven and Robert Eenhoorn, who both coached Halman at one point, as well as former teammate David Aardsma, also of Dutch ancestry, also expressed their shock and sent condolences.