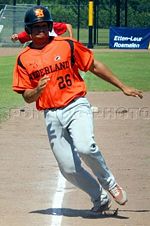 The brother of Gregory Halman and son of Eddy Halman, Jason Halman was playing regularly in Hoofdklasse Honkbal at age 16 like his brother.

Halman was picked to play for the North in the 2010 Hoofdklasse All-Star Game, the first Hoofdklasse All-Star Game. For the season, he fell to .279/.314/.378 with 33 RBI in 41 games. He took over at catcher for Kinheim with Smeets moving to first base; Halman had 12 passed balls. He led the 2010 Hoofdklasse in passed balls, was 10th in runs (25, between Sidney de Jong and Rene Cremer), tied for 4th in hits (48, behind Bryan Engelhardt, Dirk van 't Klooster and Raily Legito), was 4th in RBI (3 behind leader Engelhardt, 2 behind Legito and one behind Danny Rombley), tied for third in doubles (11, trailing Legito and Dwayne Kemp), tied for 7th in home runs (2), was 7th in total bases (65) and ranked 10th with 31 strikeouts.

Making the Dutch national team for the first time, he hit .353/.353/.647 in the 2010 Haarlem Baseball Week, with four hits in a win over Taiwan. In the 2010 European Championship, he was 2 for 11 with a walk, run and RBI, backing up Sidney de Jong and Bas Nooij at catcher. The Dutch won the Silver Medal; Halman did not play in the Gold Medal game loss to Italy. In the 2010 Intercontinental Cup, he played one game, going 3 for 4 with two doubles and two runs as the DH against the Thailand national team. For the rest of the event, he did not play, as the team went to veterans Engelhardt and Bas de Jong at DH.

On the morning of November 21, 2011, Jason's brother Greg Halman was found by Dutch police at his home in Rotterdam, victim of a stab wound, and died soon after. Police indicated that they had arrested a 22-year-old man in connection with the stabbing, who was identified as Jason. He was rumored to be the main suspect in the tragic death. During his trial the following August, prosecutors and his defense lawyers agreed to have the charge reduced to manslaughter, pleading that Jason was undergoing a psychotic episode at the time. He was formally acquitted on August 30th. Jason Halman was allowed to walk free after psychiatric and psychological assessments found "there is only a remote chance of any reoccurrence; it is well possible that the psychosis has been a singular event."

This biographical article is missing the person's: height weight
Retrieved from "https://www.baseball-reference.com/bpv/index.php?title=Jason_Halman&oldid=739086"
Categories: