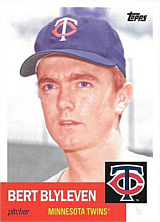 Inducted into Hall of Fame in 2011

"“I get enjoyment from striking out a guy and making him look bad... I’ve always been a strikeout pitcher. It’s the best way to get rid of the hitter. If he doesn’t make contact, there can be no chance for a mistake.” - Bert Blyleven, 1984

“He is the best curveball pitcher I’ve ever seen." - Orlando Cepeda 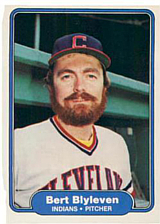 Known for his terrific curveball, pitcher Bert Blyleven won 287 games over a 22-year major league career. He was elected to the Hall of Fame in 2011.

Blyleven was born in the Netherlands, one of only nine major leaguers to have been born in Holland as of 2020 (several major leaguers were born in the Kingdom of the Netherlands outside Holland). His family relocated to Canada when he was 16 months old and, at age 5, he moved to California, where he learned baseball. After high school, he was selected by the Minnesota Twins in the third round of the 1969 amateur draft. He played just 21 games in the minors before being called up by the Twins in 1970 to replace an injured Luis Tiant in the rotation. He made his big league debut on June 5, starting against the Washington Senators. After giving up a home run to leadoff hitter Lee Maye, he pitched 7 scoreless innings to record the win. In a September 16th contest against the California Angels, he struck out the first 6 batters of the game (tying an American League record) and whiffed 8 of the first 10 he faced. The youngest big leaguer that summer at age 19, he ended the year with 10 wins and a 3.18 ERA. Blyleven's ERA decreased each of the next three seasons while his win and strikeout totals climbed. In 1973, he won 20 games (for the only time in his career) while leading the AL with 9 shutouts and finishing second in the circuit with a 2.52 ERA and 258 strikeouts. He also appeared in the All-Star Game, giving up 2 earned runs in an inning of work and taking the loss.

During the 1976 season, Blyleven was traded to the Texas Rangers as part of a six-player trade that also involved Danny Thompson, Bill Singer, Roy Smalley, Mike Cubbage and Jim Gideon. In his first start for the club, he threw an 11-inning complete game and in his fourth outing with the team, he hurled a 10-inning one-hitter against the Oakland Athletics. The following year, he threw a no-hitter against the California Angels on September 22nd. After a season and a half in Texas, Blyleven was part of another blockbuster deal, this one involving four teams and 11 players, that sent him to the Pittsburgh Pirates for the 1978 season; in effect, his part of the deal only involved him going to Pittsburgh in return for outfielder/first baseman Al Oliver and infield prospect Nelson Norman. In 1979, he set a record for most no-decisions in a season with 20; finishing the season with 17 decisions in 37 starts and going 12-5 as his team won the NL East title. That year, in the NLCS against the Cincinnati Reds, he went the distance in Game 3 to clinch the sweep for his team. In the World Series, he earned a relief win in Game 5 as the Pirates downed the Baltimore Orioles in seven games to capture the championship.

Following a disappointing 8-13 record for Pittsburgh in 1980, Blyleven was dealt to the Cleveland Indians as part of a six-player trade. He missed all but 4 games of the 1982 campaign due to an injury but bounced back by 1984, winning 19 games for an Indians team that won only 75. The following August 1st, he was traded back to the Twins for four players. He ended the summer with 17 wins between the two clubs, leading the AL with 5 shutouts and 24 complete games. With Minnesota in 1986, Blyleven set the major league record by surrendering 50 home runs. He claimed that "about 42" of the 50 were solo home runs, but in fact he surrendered 27 solo shots, 18 two-run homers, 3 three-run homers, and two grand slams that year. Despite all those blasts, he had a solid season, going 17-14 for a mediocre team. The following summer, 1987, he won 15 as the Twins improved and won the AL West title. He earned 2 wins in the ALCS as his club upset the Detroit Tigers and notched another victory in Game 2 of the World Series as Minnesota beat the St. Louis Cardinals in 7 games. That Twins team was remarkable as it had only two reliable starters in Blyleven and Frank Viola, whom manager Tom Kelly used as much as possible in the postseason. The third starter was rookie Les Straker, and after him were an end-of-the-rope Joe Niekro and Steve Carlton.

After leading the AL with 17 losses in 1988, Blyleven was traded to the Angels. He won the American League Comeback Player of the Year Award after going 17-5 with a 2.73 ERA in his first summer in Southern California. He missed the entire 1991 season but came back again in 1992 at age 41 to post an 8-12 record in 24 starts. Let go by the Angels after that season, he signed with the Twins for 1993 but did not make the club. At the end of his career, Blyleven appeared in a TV commercial for a home realtor company. The commercial played off the fact that the veteran pitcher had played on so many teams.

Blyleven totaled 287 victories during his major league career. His 3,701 strikeouts rank fifth all-time and his 60 shutouts rank ninth. The eight pitchers ahead of him on the shutout trail are all in the Hall of Fame, as are 15 of the 16 pitchers immediately behind him. The exception is Luis Tiant, who had 49 shutouts and 229 wins. Eight of the ten most similar pitchers by similarity scores to Blyleven are also in the Hall, with the most similar being Don Sutton. The two non-Hall of Famers on his list, Tommy John and Jim Kaat, were contemporaries for whom strong arguments could be made for their inductions. Additionally, Blyleven appeared on two World Series winners, and his ERA in World Series play was 2.35.

Blyleven returned to his birthland to pitch in the 1993 World Port Tournament, striking out three in two innings. He also was the pitching coach for the Dutch national team in the 2009 WBC, succeeding Brian Farley, and received much praise for the outstanding performance by the unheralded Dutch hurlers, who managed to hold the powerful hitters from the Dominican Republic, Puerto Rico, and Venezuela in check.

Since 1995, Blyleven has been a broadcaster for the Twins. Fans hold up "Circle Me Bert" signs in hopes that Bert will use the telestrator to circle them on the air. Bert's son, Todd, spent seven years in the minors then became a scout.

Blyleven and the Hall of Fame[edit] 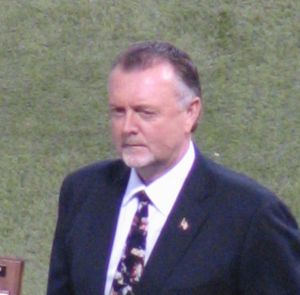 Induct Bert Blyleven To The Hall Of Fame Campaign[edit]

Rich Lederer wrote a great series of articles on why Bert Blyleven belonged in the Baseball Hall of Fame, which many credit for giving Blyleven's candidacy the boost it needed to reach the Hall before his 15 years of eligibility were up. As Lederer summed up in a few words, "Since 1900, Blyleven ranks fifth in career strikeouts, eighth in shutouts and 17th in wins." Those numbers put him in some very select company; in fact, his immediate neighbors (with only a couple of exceptions) were all Hall of Fame members or are Roger Clemens. Here are Rich's columns:

On his 14th ballot, Blyleven was elected to the Hall of Fame in 2011, receiving 79.7% of the vote, capping a remarkable progression that had seen him start with a mere 17.5% of the vote in his first year of eligibility. In his eleventh year on the ballot, he drew 61.9% of the vote, with 75% needed. In 2009, he received 62.7% and in 2010 fell a mere five votes short of election. After his election to the Hall of Fame in 2011, the Twins announced that they would retire uniform number 28 in his honor (he had been inducted into the Twins Hall of Fame in 2002). He was formally inducted on July 24th, alongside Roberto Alomar and Pat Gillick.