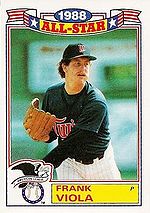 Frank first came to prominence as a pitcher for St. John's University in the early 1980s. New Yorker journalist Roger Angell wrote an account of a famous 1981 college game involving Ron Darling of Yale University and Viola. "Smoky" Joe Wood, former star pitcher and outfielder in the 1910s and 1920s and also long-time Yale University baseball coach, watched with Angell. Both pitchers threw shut-out ball for 11 innings. St. John's won the game in the 12th inning. Viola was 26-2 in college, with ERAs of 2.09, 2.16 and 0.87. Baseball America and Collegiate Baseball named him as an All-American as a senior.

Viola pitched for Team USA in the 1980 Amateur World Series; the US finished 4th in the event. He was signed as a 2nd round pick in the 1981 amateur draft by the Minnesota Twins and scout Herb Stein.

Viola went on to have some excellent seasons with the Minnesota Twins. From 1984 to 1986 he won 18, 18 and then 16 games. In 1987, after winning 17 in the regular season, he led the Twins to victory over the St. Louis Cardinals in the 1987 World Series, when he and Bert Blyleven were the team's only two reliable starters. Viola started three Series games, won two of them, and was named the Series MVP.

In his biggest year, Viola won the 1988 American League Cy Young Award almost unanimously, posting a 24-7 record. In spite of that, at the end of July 1989 he was traded to the New York Mets for a package of young pitchers. He had another 20-win season in New York in 1990, leading the league in innings pitched. Becoming a free agent, he signed with the Boston Red Sox and had some success with them in [[1993 Red Sox|1993]] and 1994, when he went 13-12 and 11-8. In both seasons, his Adjusted ERA was in the top ten in the league. He finished his major league career pitching a few games for the Cincinnati Reds in 1995 and the Toronto Blue Jays in 1996.

After he retired, Viola coached baseball for Lake Highland Preparatory School in Orlando, Florida as well as the Florida Collegiate Summer League's Leesburg Lightning. On January 26, 2011, Viola was hired as pitching coach of the Brooklyn Cyclones, the Mets' Single-A (Short Season) team in the New York-Penn League. He was pitching coach for the Savannah Sand Gnats in 2012-2013 and Las Vegas 51s in 2014-2017. In 2018, he moved to the Binghamton Rumble Ponies.

Frank's son Frank Viola III was drafted by the Chicago White Sox in 2004 and spent two seasons in rookie ball. His daughter Brittany is a diver who competed at the United States Olympic Trials in 2004 and 2008 and made the team for the 2012 Olympics.

In 2015, he was inducted into the College Baseball Hall of Fame.