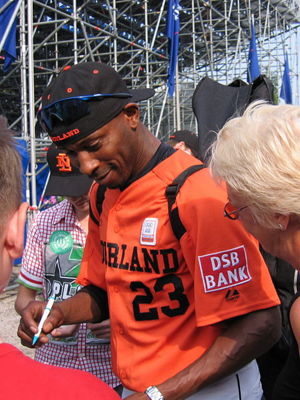 Johnny Balentina was a member of numerous Dutch national teams from 1992 through 2007. He has also played for Neptunus from 1992 through 1999 and in 2006. He has played three times in the Olympics, once in the World Baseball Classic and four times in the Baseball World Cup. Only Marcel Joost and Dirk van 't Klooster have played more games with a Dutch national team. He was the first native of the Netherlands Antilles to play 100 games for the Netherlands national club (and the 7th overall player to reach that level). Additionally, he was among the all-time leaders in appearances in Haarlem Baseball Week. Like Roger Bresnahan, Koichi Sekikawa and Doggie Miller, he is the rare baseball player to regularly appear both in center field and at catcher during his career.

In the 2006 World Baseball Classic, Balentina barely played. He backed up Sidney de Jong at catcher and Andruw Jones, Dirk van 't Klooster and Yurendell DeCaster in the outfield. He went 0 for 1 at the plate as a 9th-inning pinch-hitter for de Jong against Cuba's Yadel Marti. In the 2006 regular season, Balentina led off for Neptunus and hit .356/~.403/.441 while playing error-free ball both at catcher (27 games) and center field (13 games). He finished third in the league in average, led in runs (40) and hits (63), tied for 10th in doubles (9), tied for 4th in triples (4) and the 34/35-year-old veteran stole 23 bases in 28 tries to lead in steals by five.

In the 2007 Hoofdklasse Honkbal season, Johnny batted .350/.423/.467 and stole 16 bases in 23 tries. He was 8th in the league in average, tied for second with three triples and tied Raily Legito and Ronald Jaarsma for the lead in stolen bases.

Through 2006, Balentina's 39 triples were the most in Neptunus history as were his 146 steals.

Balentina played for the Royal Scorpions in Curacao in 2008, the first time since 1990 he had not appeared in Hoofdklasse. He signed with Parma for 2009, following fellow Dutch national Ivanon Coffie to play in rival Italy. It had been two decades since Eddy Tromp and Win Remmerswaal had been the most recent Dutch players in Italy. With Parma, Balentina was expected to mentor Riccardo Bertagnon. Balentina debuted on Opening Day as the starting catcher and leadoff man for Parma but went 0 for 4 with two K's.

This biographical article is missing the person's: height weight
Retrieved from "https://www.baseball-reference.com/bpv/index.php?title=Johnny_Balentina&oldid=1083380"
Categories: