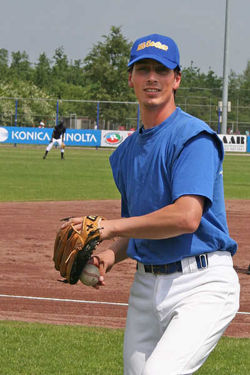 Jurjan Koenen held the Hoofdklasse Honkbal record for games played with one team, with 691 games for HCAW; Dè Flanegin surpassed him in 2013. He played with the team from 1988-2008, with 329 runs, 370 RBI, 685 hits, 40 homers and a .274 average. He was known for his superb defensive play at third base, though he had caught at times for the first half of his career. He played 32 games for the Dutch national team as well, from 1991 through 2003. He helped the Dutch win Gold in the 1993 European Championship, batting .324/.366/.459 with 8 RBI in nine games while fielding .919 at the hot corner. He tied Johnny Balentina, Arnaud Fau and Rickard Reimer for 8th in the event with 17 total bases and his 12 hits tied for 7th with Rudi Brouwers, Balentina, Ruggero Bagialemani and David Meurant.

In 2007, Koenen retired and became HCAW's third base coach. The team retired his number 12, the 4th number in team history to be retired. He came out of retirement later in the season, going 1 for 3 with a walk. Koenen studied Business administration and works as a cluster manager for the Cap Gemini company as of 2008.

Koenen was promoted to head coach of HCAW for 2009 but decided not to return in 2010 to spend more time with his family. He was replaced by Bill Froberg.

This biographical article is missing the person's: height weight
Retrieved from "https://www.baseball-reference.com/bpv/index.php?title=Jurjan_Koenen&oldid=1023374"
Categories: