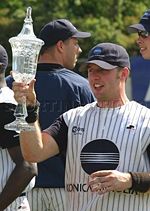 The brother of Michael Duursma, catcher Mark Duursma has played for the Dutch national team and for the Pioniers.

Duursma played for numerous Dutch teams over his early years, in 1993 for a youth team, in 1997 for the junior team and for "Young Orange" from 1998 through 2000. In 1999, Mark made his Hoofdklasse debut with Kinheim, having come up the ranks for them. After just two games there, though, he moved to the Pioniers. In 2000, he tied for 4th in Hoofdklasse with two triples.

From 2000 through 2002, Duursma went to school in the USA, playing ball for two junior colleges in California. Returning to the Pioniers, he was reunited with brother Michael. In 2003, Mark tied Jeffrey Sprott for 10th in Hoofdklasse with 22 RBI; as Michael led the league in runs, the two likely were often part of a run-scoring combination.

In 2007, Duursma struggled with serious injuries hitting .219/.345/.271. In early June he suffered a concussion after a collission at the plate with ADO player Jermaine Esprit. In September during the third and final game of the play-offs against Neptunus, Duursma dislocated his shoulder while sliding into third base and was unable to play in the 2007 Holland Series; the Pioniers lost again.

Duursma bounced back and then some in 2008, hitting .387/.473/.510 with 36 runs in 41 games. He tied Eugène Kingsale and Benjamin Dille for 2nd in Hoofdklasse in runs (2 behind Sidney de Jong), tied Bryan Engelhardt for 7th in RBI (30), tied for 8th in doubles (10), tied for second in triples (3), tied Sidney de Jong for 2nd in total bases (79, 2 behind Bas de Jong), was 10th in walks (24), led in hits (60), led in average (.027 ahead of Sidney de Jong), was 5th in slugging and 4th in OBP. That earned him Hoofdklasse MVP honors, the first player in Pioniers team history to be so honored. He beat out co-finalists Bas de Jong and Tjerk Smeets. Despite his success, Duursma was left off the Dutch roster for 2008 Olympics as Sidney de Jong and Smeets were selected as the catchers.

The Pioniers retired his number 19.

This biographical article is missing the person's: height weight
Retrieved from "https://www.baseball-reference.com/bpv/index.php?title=Mark_Duursma&oldid=1034545"
Categories: