Jamel Boutagra was a member of the French national team for a decade and a half.

Boutagra's batting line in the 1993 European Championship was .313/.476/.375 and he had 10 walks and 11 runs in 9 games. He stole six bases in six tries. He tied Marco Ubani, Olof Lindfors and Johan Hasselström for 4th in the Euros in runs, tied Marcel Joost, Mervin Beauperthuy and Igor Makhambetov for third in steals, was second in walks (4 behind Eric de Bruin) and missed the top ten in OBP by .005. He had 13 putouts, one assist and no errors in right field, tying Roger Sund for the best fielding percentage there in the tournament.

In the 2001 Baseball World Cup, the veteran of the international stage hit .222/.276/.407 while manning left field. In the 2001 European Championship, Jamel hit .133/.316/.133 for France. In the 2003 Baseball World Cup, he had his brightest moment, batting .500/.591/.813 as the French right fielder. He led the Cup in average, beating out at least nine former or future major league players as well as the Cuban stars. He was left off the All-Tournament outfield as Rubén Rivera, Takashi Yoshiura and Frederich Cepeda were selected instead.

Boutagra hit .295/.400/.455 for the Tigers de Toulouse in the 2007 Division Élite. His backup at catcher, Frédéric Hanvi, posted inferior numbers but got a contract with the Minnesota Twins.

Boutagra became head coach of Toulouse for 2008, guiding them to a 10-18 regular season finish. He batted .369/.500/.538 to lead the team in average and also pitched frequently (1-3, 5.40 in 50 IP). He moved to DH so that Hanvi could play catcher when he was not in the USA. He was seriously injured on June 24, 2008, when he received a ball to the face while at bat againt the Paris Université Club. He was rushed to hospital and had emergency surgery to repair the damage to his cheekbone. He was unable to play for Team France in Prague that summer because of the injury. [1] 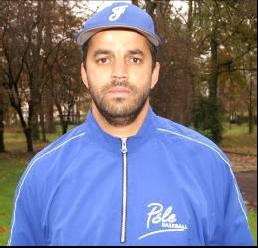 Jamel in uniform for the Toulouse baseball academy

For 2009, he joined the French Baseball Toulouse Academy as a hitting coach. [2] He was just 2 for 13 in the Division Elite that year. He then signed with the Templiers de Sénart as a player-manager. He was the first base coach for the French national team in the 2013 World Baseball Classic Qualifiers in Jupiter, FL in September of 2012.

This biographical article is missing the person's: birth place
Retrieved from "https://www.baseball-reference.com/bpv/index.php?title=Jamel_Boutagra&oldid=1078065"
Categories: