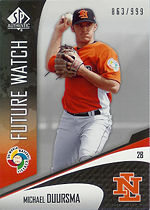 Shortstop Mike Duursma is the brother of Mark Duursma. He was one of the few Dutch players to play in NCAA Division I in the USA, performing well, then became a star in Holland. Duursma has also spent several years on the Dutch national team.

He won the Ron Fraser Award in 1994 as the top Dutch prospect. Duursma played for HCAW in the Netherlands from 1996-1998, helping them win two titles during that time.

Michael hit .343/?/.414 in 1999 as a sophomore for Cypress Community College; he had started at shortstop as a freshman as well. Also in 1999, Duursma played for the Dutch team in the European Championship and was rated the best defensive player. He also was with HCAW in Hoofdklasse and went 5 for 9 with 2 runs, 2 RBI, 2 doubles and a steal in a valiant effort in a losing cause in the 1999 Holland Series.

In his senior year, he started every game for Purdue at shortstop, usually hitting 9th. He fielded .938 and was called by the Purdue website "[a]rguably the best defensive shortstop in the Big Ten." He batted .298/~.378/.416 and went 3 for 7 in the Big Ten Conference tournament. He made the All-Conference team as the top shortstop. Overall, he had hit .283/~.351/.374 with Purdue. 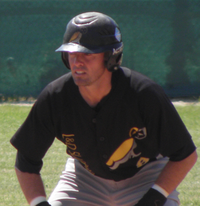 Undrafted in the 2001 amateur draft, Duursma returned to the Netherlands with the Minolta Pioniers. He hit .340 in 2002 but did not qualify for the batting championship; he would have tied Percy Isenia for 4th in Hoofdklasse. He did tie for sixth with two triples.

Mike replaced Ralph Milliard on the Dutch national team for the 2003 World Port Tournament but saw limited action, going 0 for 2 with 3 runs, presumably used as a pinch-runner. He also was on the European Cup victors. With the Pioniers, he led Hoofdklasse in runs (43, 6 more than runner-up Milliard) and tied for 9th with 10 steals.

Duursma hit .328 in 2004, fifth in Hoofdklasse. He again led in runs (39, four more than René Cremer) and tied Johnny Balentina for sixth in hits (45) and led in steals (20 in 21 tries, two more SB than Milliard). He also went 0 for 4 against Japan in the 2004 Haarlem Baseball Week. He failed to make the final cut for the 2004 Olympics as the Dutch team went with Evert-Jan 't Hoen, Milliard and Raily Legito on the middle infield.

During the 2006 World Baseball Classic, Duursma had the best average on the Dutch team, though he played in just one game. Michael went 2 for 4 with two strikeouts in the contest against Panama.

He was 4 for 15 with 4 walks and 3 runs in the 2006 Haarlem Baseball Week as the Netherlands took the title. In the 2006 Intercontinental Cup, Duursma batted .323/.432/.323. In the Gold Medal game, with the Netherlands down 3-2 in the bottom of the 10th, Duursma singled off of Frank Montieth, then scored on a double by Dirk van 't Klooster. The Dutch team got no closer but still won a nice Silver.

Duursma hit .143/.208/.286 and made two errors as the worst Dutch starting position player in the 2007 European Championship. The team still won the Gold and qualified the 2008 Olympics. He was 3 for 16 with 4 walks in the 2007 World Port Tournament. Mike struggled again in the 2007 Baseball World Cup, going 1 for 7 with a run and an error in three games as Roel Koolen took over as the main second baseman. 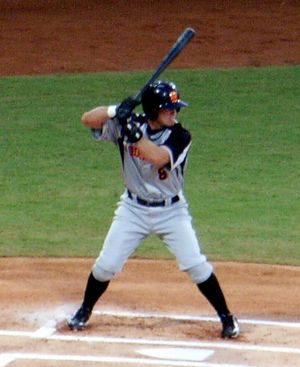 Duursma at the 2008 Summer Olympics

Duursma hit just .091/.167/.136 as the starting shortstop for the Netherlands in the 2008 Olympics; he was a fill-in as expected starter Hainley Statia was injured about a month before the Games.

Duursma was 1 for 7 in the 2009 World Baseball Classic; after Statia again got hurt, he filled in at second base with 2B Sharlon Schoop moving to third.

Mike was only 1 for 18 in the 2009 World Port Tournament but drew 10 walks (leading the event) and scored four runs with an undiagnosed fractured left hand sustained in the first game against Cuba. He sat out the finale as Raily Legito was used at shortstop.

He managed the Amsterdam Pirates in 2020; the team was winning the 2020 Holland Series 2 games to 0 when it was canceled due to COVID-19 safety restrictions in the Netherlands. Neither team was declared a winner. He then led the club to the 2021 Holland Series title before stepping down; he was the second straight Amsterdam head coach to go out a winner, following Brian Finnegan.