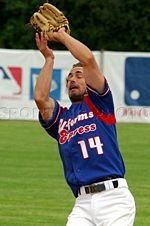 Ovesný played for the Czech Republic in the 1997 European Championship and tied for third in the event with 3 steals. He scored 9 runs, second on the team behind former minor leaguer Pavel Budský. He tied for 6th in the event. He spent 1997-1998 at San Mateo College.

In the 1999 European Championship, he was the lone starting second baseman to not make an error. He hit .333 and his .500 OBP tied for 10th in the tournament. His 8 runs were third behind former big leaguer Rikkert Faneyte and minor leaguer Claudio Liverziani. His four steals tied Liverziani for third. For his work, he was named to the tournament All-Star team at 2B; the other basemen chosen were both former minor leaguers, Andrea Castri and Evert-Jan 't Hoen.

In both 1998 and 2000, Tomáš was MVP of the Czech Extraliga playoffs, helping Draci Brno to titles. He hit .375/.459/.375 in the 2001 European Championship with 4 steals in 5 tries, 6 runs and 6 RBI in 8 games; his defense was poor with 6 errors and a .867 fielding percentage. He tied for the tournament lead in steals (even with former major leaguer Ralph Milliard) but also tied for the most errors.

He was 1 for 17 with 2 runs and 7 strikeouts in the 2002 World University Championship, fielding only .813 at shortstop.

He coached for the Czech Republic in the 2010 World Junior Championship.