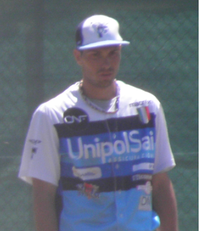 Claudio Liverziani is an outfielder/first baseman from Italy. He was a minor league infielder in the Seattle Mariners organization and is currently one of the top players in the Italian Baseball League. In the 1995 European Championship, he hit .286/~.444/.393 for the runner-up Italian team. He was 3 for 14 in the 1995 Intercontinental Cup but drew five walks and his hits were a double, triple and homer. He started his career with Novara before moving to Juventus Torino '48 for a year in 1996. From 1997 to 1998 he played in the Seattle Mariners organization for the Wisconsin Timber Rattlers of the class A Midwest League. He and David Rigoli were the first Italians to play in the US minors since Alberto Rinaldi in the 1960s; the Italian baseball establishment had fought against players going to the US in the interim, keeping them amateurs to play in the Baseball World Cup and later Olympics. They put in a rule banning players for five years if they signed with a US team; when international competition was opening up for professionals, they eliminated the rule, allowing players like Liverziani, Rigoli, Andrea Castri, Giuseppe Mazzanti, Francesco Imperiali and Mario Chiarini go to the US in the late 1990s and early 2000s.

In 1999, Liverziani returned to Italy with Semenzato Rimini, with whom he won two Italian championships. He was the All-Star left fielder in the 1999 European Championship, hitting .467/.720/.667 with 10 walks and 10 runs in five games. In the 1999 Intercontinental Cup, Liverziani hit .417/.533/.667 to earn All-Star honors in the outfield alongside Yobal Duenas and Yuan-Chia Chen. He was second to Akinori Iwamura in the event in batting average, beating out several major leaguers. He was given the Max Ott Award as the Best Player in the Italian Baseball League in 2000, 2003 and 2014, the first three-time winner. He transferred to Italeri Fortitudo Bologna where he won two more championships.

In 2007, Liverziani won a Gold Glove in the outfield. He was 1 for 12 with a walk, two runs and two RBI for Bologna in the Matino phase of the 2009 European Cup. He was 1 for 7 with a double, run and RBI in the final phase of the Cup.