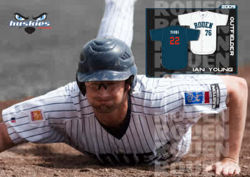 Ian Young starred in a couple European Championships. His career took him to many countries in Europe.

After college, Young began his long baseball journey in Europe. He has played for England's Windsor Bears, Sweden's Alby Stars, Holland's Robur 58, Germany's Tübingen Hawks, Portugal's Academica Coimbra and France's Senart Templier. Young hit .415/.500/.683 in 12 games for Tübingen in 2006 but failed to play enough to qualify for the league lead in anything. In 2007, he hit .254/.376/.320 for Senart Templier.

Ian signed on with the Rouen Huskies in Division Elite for the 2009 season. He was also named to the preliminary 40-man roster for the British national team that will play in the 2009 Baseball World Cup but did not make the final cut. He was on the British team in the 2012 European Championship but did not play.

Playing first base for Britain in the 2013 European Championship Qualifier, Ian finished with the highest batting average in the tournament at .588, more than 100 points above the next best. He was among the league leaders in most other offensive categories as well and received the Best Batter award for the tournament.

Through 2017, he was the all-time British national team leader in average (100+ AB; .374, .047 ahead of Alan Bloomfield), hits (49, 4 ahead of Brad Marcelino), doubles (10, two ahead of Matt McGraw and Marcelino), triples (3, tied for first with Oscar Marcelino) and RBI (35, 9 ahead of Sam Wiley). He tied Brian Thurston for 9th in runs (18). That year, he joined Don Smallwood and Nick Carter in being voted into the British Baseball Hall of Fame.