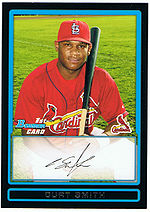 Curt Smith was named Player of the Year in his first minor league season. He was the 2011 Baseball World Cup MVP and 2014 European Championship MVP, the only man to win both MVP awards.

Going on to college, Smith starred at the University of Maine. He hit .343/.381/.500 as a freshman with 10 steals in 12 tries but fielded only .852, playing primarily at third base. He was a Louisville Slugger Freshman All-American. He lost America East Conference Rookie of the Year honors to Scott Diamond. He finished 10th in the Conference in average and second in triples (5).

The captain of the 2008 Maine Black Bears, the talented batsmen posted a line of .403/.498/.722 with 60 runs in 49 games. Moved to first base, he fielded .995. He led the America East Conference in average, slugging, runs and total bases (127), was second in OBP, tied for second in hits (71) and homers (11), was third in walks (32) and tied for 5th in doubles (17). He finished his college career first all-time in Maine history in triples (19), second in hits (300), third in doubles (60) and tied for third in RBI (178). Curt was 31st in NCAA Division I in slugging. He was named to the All-Conference team at first base and won Player of the Year honors despite his club finishing in last place. He was only the third University of Maine player to be named America East Conference Player of the Year; Mark Sweeney had been one of the other two. Smith went in the 39th round of the 2008 amateur draft, taken by the St. Louis Cardinals.

Smith made a great pro debut, batting .378/.418/.585 for the Johnson City Cardinals with 49 RBI in 47 games (he also hit .255/.333/.589 in 11 late-season games for the Quad Cities River Bandits). He led the Appalachian League in average by .013, led in OBP and tied Geraldo Rodriguez for the lead in RBI. He was named to the Appy League All-Star team at first base and was named Player of the Year. Despite his success (and likely due to his age), Smith was not listed as one of Baseball America's top 20 prospect in the circuit.

After playing for the Lincoln Saltdogs in 2011 and producing at a .335/.380/.494 rate, Smith returned to the Netherlands squad. He was the Baseball World Cup MVP in the 2011 Baseball World Cup, helping his country win its first Medal in that event - a Gold. He scored both Dutch runs in their 2-1 win over Australia. In the Gold Medal game, he was 2 for 3 with a walk and scored the winning run in a historic 2-1 victory over Cuba. Even though he was named the tourney MVP, he did not make the Cup's All-Star team as José Dariel Abreu was picked at 1B instead. For the tournament, he hit .375/.438/.700 with 4 doubles, 3 home runs, 13 runs and 13 RBI in 12 games.

His 2011 Baseball World Cup performance earned him a look in Organized Baseball again. The Miami Marlins signed him and sent him to the Jacksonville Suns; he hit .261/.315/.440 in 96 games for the team as a 1B-DH. He hit .286/.390/.543 with 7 runs and 9 RBI in 9 games in the 2012 European Championship, including a double and two stand-up triples against Great Britain, but was 0 for 4 when the Netherlands lost the Gold Medal game to Italy.

Smith was the Netherlands' first baseman again in the 2013 World Baseball Classic. He kept on hitting, .321/.412/.464 with 4 runs and 4 RBI in 8 games as the Dutch surprisingly made the final four before falling to the eventual champion Dominican national team. Smith had two hits, including a homer off Ismel Jiménez, in a win over Cuba, then had three hits in their critical 7-6 follow-up win over the Cubans. Smith was third on the Netherlands in average after major leaguers Andruw Jones and Andrelton Simmons, was second to Jones in OBP, second to Simmons in slugging and tied with Jonathan Schoop for second to Simmons in OPS.

Smith shined in the 2014 European Championship. He went 15 for 32 with 16 runs, 16 RBI, 6 home runs, 4 walks and a hit-by-pitch in eight games. In the Gold Medal game, he homered off Mike Colla in the 4th and off Pat Venditte in the 8th and also drew a walk while being retired only once as the Netherlands beat Italy 6-3 for their first title in 7 years and 21st European Championship. Going into the Gold Medal game, Smith was tied for fifth in the event in average (with Yurendell de Caster and Randolph Oduber), third in slugging (behind Alex Liddi and Jakub Sládek), third in total bases (30, behind Oscar Angulo and Sládek), tied for third in homers (with Liddi, Angulo and Jesús Golindano, one behind Sládek and Gianison Boekhoudt), tied for second with 14 RBI (with Golindano and Hainley Statia, one shy of Boekhoudt), tied for third with 13 hits (even with Oduber and de Caster, behind Angulo and Sládek) and tied for first in runs with Oduber. With the Gold Medal game added in (which did not count to the official leaderboard), he was first in total bases, home runs, runs and RBI. He was named European Championship MVP, the first MVP of both the Baseball World Cup and Euros.