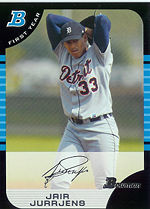 Jair Jurrjens is a pitcher who debuted in the majors for the Detroit Tigers in 2007, a year after he represented the Netherlands in the 2006 World Baseball Classic. He was the first Dutch Antillian pitcher in the major leagues.

In 2005, Jair was 12-6 with a 3.41 ERA for the West Michigan Whitecaps and was a Midwest League mid-season All-Star. He won his only post-season decision. He finished 7th in the league in ERA and tied for fourth in wins. Baseball America ranked him as the #16 prospect in the Tigers farm system.

Jurrjens joined the Dutch national team for the 2006 World Baseball Classic. In his first appearance for the team in a warm-up before the Classic, he relieved Rob Cordemans in an exhibition against Eckerd College. In the Classic, he entered in the 6th inning of a 3-3 game against the Puerto Rican national team, relieving Robin van Doornspeek. Alex Cintron greeted him with a single and Luis Matos doubled. Jose Valentin hit a sacrifice fly for a 4-3 Puerto Rican lead, then Alex Cora laid down a squeeze bunt. Jurrjens struck out Bernie Williams for the lone bright spot of his day. In the 7th, Ivan Rodriguez led off with a homer and Jurrjens was relieved by Dave Draijer. Overall, he had allowed 3 runs in his only inning of work and took the loss. As a result of the defeat, the Netherlands were unable to advance to the second round.

At age 20, Jurrjens started off 5-0 with a 2.08 ERA for the Lakeland Tigers and was promoted to the Erie SeaWolves, for whom he posted a 4-3, 3.36 record (for a 9-3, 2.69 season) to run his career minor league mark to 28-17, 3.21. Baseball America rated him as the 16th-best prospect in the Florida State League, 17th in the Eastern League (between Scott Mathieson and Gio Gonzalez) and 4th in the Detroit organization. They also said he had the best control of any pitching prospect Detroit had; he had walked 90 in 390 innings in the minor leagues.

Jair started 2007 with a 7-5, 3.20 record for Erie, walking 31 in 112 2/3 IP and had gone 3-0 with a 0.78 ERA in his last three starts before being called up to Detroit in the heart of the 2007 pennant race for a crucial game against Cleveland and Fausto Carmona. At the time, he was second in the EL in ERA behind Alan Horne. Jurrjens struck out the first batter he faced in the major leagues, Kenny Lofton. Jair allowed four runs on 7 innings despite giving up just 7 base runners and took a 5-2 defeat.

Jurrjens was the second Dutch national to debut in the majors in 2007, following Rick Vanden Hurk. He was the 7th Dutch Antillian in the majors, following Hensley Meulens, Ralph Milliard, Andruw Jones, Randall Simon, Ivanon Coffie and Yurendell de Caster, becoming the first Antillian pitcher in The Show. Calvin Maduro had been born in Aruba when it was part of the Dutch Antilles but Aruba was a self-governing part of the Netherlands for most of Maduro's life and had been for about a decade by the time Maduro made the major leagues.

Early in his second MLB start, Jurrjens was removed from the game and promptly went on the 15-day disabled list with an inflamed rotator cuff. Jurrjens was 3-1 with a 4.70 ERA overall for the team in his first taste of major league ball. On October 29, 2007, Jurrjens was traded with Gorkys Hernandez to the Atlanta Braves in return for Edgar Renteria.

Jurrjens quickly stepped into the Braves' starting rotation in 2008 and had excellent results, going 13-10 with a 3.68 ERA in 31 starts. He skipped the 2009 World Baseball Classic, in which the Dutch team twice upset the powerful Dominican national team in order to concentrate on spring training, and it paid off. In 2009, he took another step forward and established himself as the team's ace, with Tim Hudson missing most of the year with an injury. He started a league-leading 34 games, posting a 14-10 record with a 2.60 ERA, good for third-best in the National League. He topped 200 inning for the first time of his career and struck out 152 batters. In 2010, injuries limited him to 20 starts, during which he went only 7-6, 4.64. However, he bounced back in 2011, when he made the All-Star team. He went 13-6, 2.96, pitching 152 innings in 23 starts, until he was again felled by injuries in the second half. He missed a few starts in late July and August and made his last start on August 30th, going only 1-3, 5.88 over the second half of the season. He thus missed the crucial last month when the Braves, who were until then cruising into the postseason, but folded and were caught and passed by the St. Louis Cardinals on the last day of the season; things may well have turned out differently had he been available to pitch during the home stretch. In 2012, his health problems persisted, this time a strained groin: he went 0-2, 9.37 in April, sent time on the disabled list, and eventually finished 3-4, 6.89 in 11 games. Given his poor results, the Braves sent him down to the AAA Gwinnett Braves, where he made 14 starts, going 4-6, 4.98. After the season, they cut ties with their former ace.

On February 15, 2013, Jurrjens signed with the Baltimore Orioles, hoping to renew with success. However, he made only two big league appearances that season, pitching a total of 7 1/3 innings with no record and a 4.91 ERA. He was 6-6, 4.18 in 16 starts for the Norfolk Tides before being released on July 18th. He then moved back to the Tigers' organization, finishing the season with the Toledo Mud Hens, where he was an unconvincing 1-4, 5.49 in 7 starts. It took him until late May to fin a team for 2014, signing with the Cincinnati Reds on May 18th. He was assigned once again to AAA, with the Louisville Bats and was 2-3, 4.46 after 6 starts when he was traded to the Colorado Rockies for a minor leaguer on July 2nd. Immediately inserted in the major league starting rotation, he had to leave his first start, on July 4th against the Los Angeles Dodgers, in the 5th inning after developing respiratory problems. He had not pitched particularly well up to that point, allowing 8 runs on 12 hits and being charged with a 9-0 loss after the game.

Jurrjens was pitching in the minors in 2017 when he was suspended for 80 games in June for a positive test for exogenous testosterone. He said it was due to a medication he had been taking for depression in the off-season.