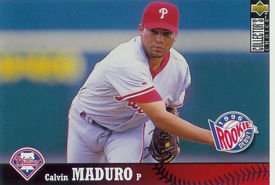 Pitcher Calvin Maduro was one of the first Arubans in the majors and later pitched in the Olympics.

Early years in the Baltimore chain[edit]

Maduro was signed by the Baltimore Orioles in 1991. He debuted in 1992 with the GCL Orioles, going 1-4 but wih a 2.27 ERA and almost a strikeout per inning. Promoted to the Bluefield Orioles for 1993, he went 9-4 with a 3.96 ERA and only 17 walks to 83 strikeouts in 91 innings. He led the staff in wins and K's. Maduro led the Appalachian League in innings pitched, strikeouts and complete games (3) and tied Javier DeJesus for the most victories. He was named as the Appy All-Star right-handed pitcher that season. The 2008 Orioles Media Guide lists him as finishing his studies at the Tourist Economy School in Aruba but the Aruban school listings do not show such a school.

In early September 1996, Maduro was sent (along with Garrett Stephenson) as a player to be named later in a deal with the Philadelphia Phillies; Baltimore got Todd Zeile and Pete Incaviglia in the trade. Calvin made his Phillies organizational debut as a major leaguer, as the 3rd pitcher in a 5-3 loss to the Cubs. Replacing Russ Springer, he hit Scott Servais, his first MLB opponent. Luis Gonzalez lined out but Rey Sanchez singled Servais to third. Opposing hurler Jaime Navarro then lined into a double play. Ken Ryan relieved Maduro. He missed being the first Aruban major leaguer by 5 days, as Eugene Kingsale had beaten him to the punch. Overall, Calvin went 0-1 with a 3.52 ERA in 4 games for the 1996 Phillies.

A free agent, Maduro returned to Baltimore. He was with Rochester for all of 1999, posting a 11-11, 3.99 record and leading the team in wins and strikeouts (149). He was 8th in the International League in ERA and just two strikeouts behind IL leader Jeff Juden.

He was knighted by Queen Beatrix of the Netherlands during a ceremony in April 2003 along with Eugene Kingsale and Sidney Ponson.

In the 2003 Baseball World Cup, Maduro pitched four hitless, scoreless innings against France in his debut for the Dutch national team.

Maduro came to the Netherlands for the 2004 season, going 5-1 with 36 strikeouts in 45 innings for Mr. Cocker HCAW. Maduro was the second former Major League pitcher in Hoofdklasse Honkbal; Stan Bahnsen preceded him by 12 years.

Maduro went 2-0 with a 1.93 ERA in the 2004 Haarlem Baseball Week and won Best Pitcher honors. In the 2004 Olympics, he pitched two games. Against the Greek national team, he allowed 2 hits (both to Nick Markakis) in 7 innings, fanning four, hitting one batter and walking two in a win. He was much worse against the Australian national team in his second start; they torched him for 8 runs (2 earned) in 2/3 of an inning, with 4 hits and 3 walks. He retired only two of 10 batters faced before being yanked in favor of Patrick Beljaards.

In the 2006 World Baseball Classic, Maduro made one appearance. He relieved Diegomar Markwell with a 4-0 deficit in the 4th against the Cuban national team and one out. He allowed a single to Carlos Tabares and retired Eduardo Paret on a grounder. Michel Enriquez then singled and Tabares scored on an error by Chairon Isenia. Yulieski Gourriel walked and Ariel Borrero singled in Enriquez, but Gourriel was thrown out at third to end the inning. In the 5th, he walked Frederich Cepeda then got Ariel Pestano to line out and Osmani Urrutia to ground into a double play. The Dutch moved within 6-2 in their half of the inning.

In the sixth, he gave up a Yoandy Garlobo single and walked Tabares. Paret popped up and Enriquez ground into a double play as Maduro escaped another jam. He began the 7th by walking Gourriel. Borrero flew out, then Cepeda singled; both Gourriel and Cepeda advanced on an error by Andruw Jones. Pestano singled in Gourriel and Urrutia crushed a 3-run homer. That signalled the end of Maduro as Michiel van Kampen was summoned from the bullpen. The former major leaguer had been charged with 6 runs, 7 hits and 4 walks in 3 innings of work.

He began the 2006 season with the Bowie Baysox and went 1-5 with a 4.50 ERA and 47 strikeouts in 38 innings and 24 appearances. He retired on June 10th to become pitching coach of the Aberdeen IronBirds and held that job for two years. He came out of retirement briefly at the end of 2006, joining DOOR Neptunus for the Dutch playoffs and beating fellow Aruban Conrad Orman in a good outing but Neptunus failed to advance to the Holland Series.

In 2008, Maduro became pitching coach for the GCL Orioles, marking his 13th year in the Orioles organization. By 2010, he was an international scout for Baltimore, covering the Caribbean and Europe (their only scout covering Europe at that point). His signees have included Cristian Alvarado, Miguel Gonzalez, Gabriel Lino, Jhon Peluffo and Gillian Wernet. Maduro remained an international scout until he was released by the Orioles in September 2019 as part of their wholesale overhaul of the scouting and player development programs.