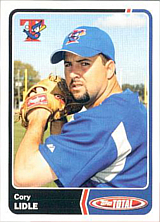 Pitcher Cory Lidle was a nine-year major league veteran who played for seven teams before being tragically killed in a plane crash at age 34.

Undrafted out of high school, it took Lidle a somewhat long time to reach the majors. He signed with the Minnesota Twins and made his pro debut in 1991, going 1-1 with a 5.79 ERA in 4 games for the GCL Twins. He spent the next year primarily in a relief role with the Elizabethton Twins, where he saved 6 games, going 2-1 with a 3.71 ERA. However, he was released by the Twins the following spring. He then signed with the Pocatello Posse (an independent club added to the Pioneer League as a late addition to replace the Salt Lake City Trappers) and won 8 games for the team to tie two other hurlers for the league lead (he lost 4, saved one and had a 4.13 ERA). After the season, he was purchased by the Milwaukee Brewers organization. He split the 1994 season between the Stockton Ports, where he was primarily a reliever and saved 4 games (going 1-2, 4.43), and the Beloit Brewers, where he was mainly a starter and went 3-4 with a 2.61 ERA and only 11 walks in 69 innings. In 1995, Lidle played for the El Paso Diablos, making 9 starts and appearing in 36 games in relief, posting a 3.36 ERA and being named to the Texas League midseason All-Star team. He was 5-4 with two saves and finished fifth in the TL in ERA.

Prior to the 1996 season, Lidle was traded to the New York Mets for catcher Kelly Stinnett. He spent the year with the Binghamton Mets, where he was used exclusively a starter, and won 14 games for the club, losing 10 and posting a 3.31 ERA. He led the Eastern League in innings pitched (190) and tied Carl Pavano for the lead in complete games (six) while finishing 7th in ERA. He began the next year with the Norfolk Tides, going 4-2 with a 3.64 ERA in 7 starts before being called up by the Mets in May. He had a successful first campaign in the majors, posting a 7-2 record and a 3.53 ERA in 54 appearances. After his rookie season, Lidle was selected by the Arizona Diamondbacks in that year's expansion draft. However, he missed most of 1998 due to an elbow injury, making just two minor league starts all year.

After the 1998 season, Lidle was claimed off waivers by the Tampa Bay Devil Rays. Still recovering from elbow surgery, he made 5 rehab appearances in the minors the next season before joining the Devil Rays in September and pitching in 5 games. He spent most of 2000 in the majors, where he went 4-6 with a 5.03 in a year split between the rotation and the bullpen. Prior to the 2001 season, he was traded to the Oakland Athletics as part of a three-team deal and joined the team's starting rotation. Lidle began that year slowly, going 1-4 with a 4.66 ERA through June before heating up in the season's second half and going 12-2 with a 2.74 ERA the rest of the way. Once again, in 2002, he started the season slowly (2-7 with a 5.30 ERA) before going 6-3 with a 2.69 ERA after the All-Star break. He pitched 32 consecutive scoreless innings from July 30 to August 26 and was 5-0 with an 0.20 ERA in August. After the season, he was traded to the Toronto Blue Jays for Chris Mowday and Mike Rouse. He began the 2003 season going 10-4 before a groin injury slowed him in the later part of the year. After one year as a Blue Jay, Lidle became a free agent following the season.

Lidle signed with the Cincinnati Reds in early 2004 and was the club's Opening Day starter. He went 7-10 for the club before being traded to the Philadelphia Phillies in August. He found more success in the Phillies' rotation, going 5-2 with a 3.90 ERA for the team down the stretch. Returning to the Phillies in 2005, he tied a career high with 13 victories. Lidle remained with the club for most of the 2006 season before coming over to the New York Yankees on July 30 in the deal that also brought Bobby Abreu to New York.

Lidle's forte was control - he gave up only 2.42 walks per nine innings during his career, which put him among the leaders for active pitchers. The similarity scores method shows Paul Byrd, a contemporary of his, as the most similar pitcher.

Lidle died on October 11, 2006, when an airplane he was co-piloting crashed into a residential New York City building. He had taken up flying as a hobby in the previous year and a half and had been planning to fly home to California after the baseball season ended in New York. He was survived by his wife Melanie and a 6-year-old son, Christopher. A federal safety panel later ruled that the crash occurred because Lidle and his flight instructor misjudged a turn, but Lidle's wife and the family of instructor Tyler Stanger sued the aircraft manufacturer for $50 million, blaming Cirrus Design Corp. of Duluth, MN for the crash. Their attorney alleged that a design flaw caused the plane's steering mechanism to come out of control, dooming the two pilots.

He was a descendant of steamboat inventor Robert Fulton.