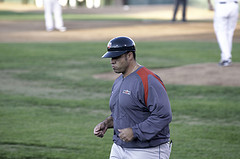 Shawn Wooten played parts of six seasons in the majors (mostly with the Anaheim Angels) and began his minor league managerial career in 2011.

A high school teammate of Jason Giambi, Jeremy Giambi, Cory Lidle, Aaron Small, and Kevin Lidle, Wooten attended college at Mt. San Antonio before being selected by the Detroit Tigers in the 18th round of the 1993 amateur draft. Released by the Tigers after two and a half seasons, he spent part of 1995 and all of 1996 with the Moose Jaw Diamond Dogs of the independent Prairie League.

Prior to the 1997 season, Wooten was signed by Anaheim, and he played that year with the Cedar Rapids Kernels of the Midwest League. He reached the majors late in the 2000 campaign, getting 5 hits in 9 plate appearances for the Angels. He spent the entire next summer with the club, hitting .312 with 8 home runs in 79 games while seeing action as a backup to Bengie Molina at catcher, Orlando Palmeiro at designated hitter, and Scott Spiezio at first base. In 2002, he appeared in just 49 games but hit .474 in 9 postseason games as Anaheim won the World Series.

Following the 2003 season, Wooten became a free agent and signed with the Philadelphia Phillies. He hit just .170 for the team and split the year between the majors and the AAA Scranton/Wilkes-Barre Red Barons. He signed with the Boston Red Sox the next year but played in just one big league game, spending most of the summer with the Pawtucket Red Sox. He played for the Rochester Red Wings in the Minnesota Twins chain in 2006 and then split 2007 between the San Diego Padres and New York Mets organizations, with a stint with the independent St. Paul Saints in between. He began 2008 with the New Orleans Zephyrs in the Mets system before wrapping up his playing days with the Portland Beavers in the Padres chain later that year.

Following his playing days, Wooten was a coach for the Eugene Emeralds in 2010 before taking over as manager of the Fort Wayne TinCaps in 2011 and the Lake Elsinore Storm in 2012-2013. Moving to the Los Angeles Dodgers chain, Wooten was a coach for the Chattanooga Lookouts in 2014 and Tulsa Drillers in 2015. He moved to the AAA Oklahoma City Dodgers as hitting coach in 2016-2017. In 2019 he returned to the Angels as assistant hitting coach for new manager Brad Ausmus, his first major league coaching job. However, he was let go when Ausmus was fired at the end of the season.