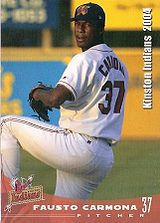 Roberto Hernandez is a starting pitcher for the Cleveland Indians who was known as Fausto Carmona from the time he signed his first professional contract in 2000 until 2011. Indians' scout Josue Herrera signed the Dominican native as an undrafted free agent in December 2000. At the time, he was thought to be 17 years old, but it would later be revealed that he was in fact three years older and had usurped another person's identity in order to appear a better prospect.

The Indians assigned Carmona to the Dominican Summer League in 2001. He advanced to Burlington in 2002, and put up strong numbers. In 13 games, the future ace owned a 3.32 ERA and walked just 10 opponents. He played for the Mahoning Valley Scrappers at the end of the season. He did not surrender a single run in three appearances with the single-A club.

2003 was Carmona's breakout season in Cleveland's system. He won 17 of his 24 starts for the Lake County Captains. In 148 innings, the sinker-baller's ERA was 2.07, and his WHIP was 0.89. The South Atlantic League named Carmona the circuit's "Most Outstanding Pitcher". In one start with the double-A Akron Aeros, he tossed 6 innings and allowed 3 runs. After the season, Baseball America ranked Carmona the third best prospect in the Indians' organization. He was also named the organization's "Player of the Year".

Carmona was sent to the Kinston Indians in 2004. He posted a 5-2 record for the club and his ERA was 2.83. In June, the Indians promoted their young arm to Akron. In 15 starts for the Aeros, Carmona's record was 4-8, his WHIP was 1.55, and his ERA soared to 4.76. Carmona made one start for the Buffalo Bisons, and allowed 4 runs in 6 innings. He also won two International League playoff games for Buffalo. Carmona won 13 games between Akron and Buffalo in 2005. His ERA between the two teams was 3.68, his WHIP was 1.21, and he walked just 35 in 173 2/3 innings. Baseball America deemed him the fifth best Indians prospect.

Carmona started the 2006 season in triple-A, but was soon called up to the Indians. He debuted on April 15th against the Detroit Tigers. The outing was a success: he held Detroit to 1 run in 6 innings, and struck out 4. He spent most of the season as a reliever, and Cleveland even experimented with using Carmona as a closer. This plan failed during a four-game stretch in which Carmona blew three saves and took a loss. He allowed 11 runs in just 2 2/3 innings during the disastrous four-game period. He finished out the season with a 1-10 record, and a 5.42 ERA.

Cliff Lee was sidelined with an injury during spring training in 2007, and a spot in Cleveland's rotation opened for Carmona. The Chicago White Sox pounded the young pitcher for 6 runs in 4 1/3 innings on April 13th, but Carmona rebounded nicely. He finished April with a 3.76 ERA, and was 4-0 in May. On May 17th, Carmona tossed a complete game shutout against the Minnesota Twins. He was 9-4 with a 2.26 ERA in the second half of the season. Carmona's 19 wins and 3.06 ERA both ranked second in the American League. He allowed just 1 run in 9 innings during his first postseason start, facing the New York Yankees; the Indians won the game in 11 innings, and won the ALDS in four games. The Boston Red Sox fared much better against Carmona, who totaled only 6 innings over the course of two ALCS starts. He surrendered 11 earned runs on 10 hits and 9 walks in the two outings. That year, veteran reliever Roberto Hernandez also pitched for the Indians; nowadays, stats from that season show two pitchers with identical names appearing for the team, but there was no confusion at the time as the younger one was not using his true name. The change in names was only made post facto.

Carmona's next two seasons were a lot less successful however. In 2008, he made only 22 starts due to various ailments and ended up 8-7, 5.44. 2009 was even worse. In 24 starts, he was 5-12, and his ERA jumped all the way to 6.32. He did pitch well in 7 minor league starts, though, and it was a sign of better things to come. Just when the Indians were about to throw in the towel in his case, he bounced back with a healthy and productive season in 2010. In spite of pitching in front of a poorly competitive team, he was 13-14, with a solid 3.77 ERA, making 33 starts and pitching over 210 innings. He was Cleveland's lone representative at the 2010 All-Star Game. He then regressed in 2011, even though the team improved and he was healthy enough to make 32 starts. His ERA rose to 5.25 and his won-loss record fell to 7-15. He did not register a complete game, and in one less start than the previous year, pitched 22 fewer innings but gave up 2 more hits. However, the Indians still decided to pick up his option for the following year.

On January 19, 2012, Carmona was arrested while leaving the United States Consulate in the Dominican Republic capital of Santo Domingo and accused of using a false identity to acquire a U.S. visa. His real name was said to be Roberto Hernandez Heredia and at the time he was 31, instead of his listed age of 28. He was released on bail the next day. Hernandez's arrest was part of a joint crackdown between U.S. immigration authorities and the Dominican police, aimed at stopping visa fraud. Countryman Leo Nunez had been identified the previous September as another player who had used a false identity to sign his first professional contract, and to have continued using it for a number of years.

Hernandez had been passing himself off as Fausto Carmona, born in the capital according to his falsified papers, which did not square well with his story of growing up impoverished on a farm in the countryside. In fact, his mother had spilled the beans when interviewed about her son on a local radio program earlier, which got wind of the fraud to authorities, who then waited for the appropriate time to effect an arrest. Contrary to Nunez's case, Hernandez's could not as easily be characterized as a one-time mistake by a young man, since he had reportedly continued to pay a yearly sum to the family whose son's identity he was using. The family had become greedy, asking for ever-increasing amounts of money, and Hernandez had apparently balked at making further payments. On January 26th, the Indians placed Hernandez on the restricted list while waiting for the situation to be sorted out. On March 12th, it was announced that he had struck a deal with prosecutors, who agreed to drop criminal charges against him in return for his performing work of communal benefit. He still needed to obtain a visa however, and he and Nunez faced a six-week suspension from Major League Baseball before being allowed to resume their careers. The Indians also restructured his contract to reflect his new reality. In the meantime, the pitcher continued to train at Cleveland's baseball academy in the Dominican Republic as the team received news in July that a visa would likely be forthcoming soon. Indeed, he rejoined the Indians on July 22nd, and was immediately handed a three-week suspension by MLB, allowing him to return to action on August 10th. His teammates jokingly welcomed him back with three birthday cakes - one for each year he had shaved off his true age while playing under his previous false identity. He used the occasion to apologize to fans and teammates: "I want to say I'm sorry," he said through an interpreter. "I thank God I am here and have been given a new chance. [...] I am extremely remorseful and apologize to the fans, teammates, the team and everybody else who has looked up to me. I am extremely happy with the support of the fan base, but do not know what (reaction) to expect." He added that the real Carmona was a distant cousin, but that the substitution had been his idea all along.

Hernandez made his first pitching appearance under his real name on August 15, 2012, being charged with an 8-4 loss to the Los Angeles Angels of Anaheim. He was undone by a five-run 2nd inning during which his teammates committed three errors. In his second start on August 21st, he had the unenviable task of facing the Seattle Mariners' Felix Hernandez, coming off throwing a perfect game. He pitched well into the 7th inning, only giving up a solo homer to Eric Thames until allowing three runs that inning to be charged with the 5-1 loss. He finished the year at 0-3, 7.53, in three starts. He became a free agent after the season and signed with the Tampa Bay Rays for 2013. When he started the season's third game for the Rays on April 4th against the Baltimore Orioles, he broke a string of 1,060 games by the Rays during which they did not use a starting pitcher 31 or over, the last being Mark Hendrickson who was 32 when he started a few games in 2006. It had also been 1,207 games since the Rays had used a starting pitcher signed as a free agent, in this case Hideo Nomo in 2005, relying for all those years on young pitchers they had developed themselves or acquired via trade. The departure from tradition did not pay for the Rays, as they lost, 6-3, with Hernandez giving up 4 runs in 6 2/3 innings. There were already rumors that his stay in the starting rotation would be short-lived, with young Chris Archer being groomed in the minors to take in place, but he was still starting for the team as June wound down. He ended up making 24 starts in 32 appearances, with a record of 6-13, 1 save and a 4.89 ERA in 151 innings. While he did give the team some innings, it is clear that the team would have received a better return from almost any other pitcher during those starts.

On December 18, 2013, Hernandez signed a one-year contract with the Philadelphia Phillies for $4.5 million, the size of the contract being a sign of how little veteran pitching was available on the free market that off-season. He made 23 appearances for the Phillies in 2014, including 20 starts, with a record of 6-8 and a 3.87 ERA in 121 innings. On August 7th, he was acquired by the Los Angeles Dodgers in return for future considerations, a reflection of the Dodgers'concern over the health and quality of their starting pitching behind their superlative "Big Three" of Clayton Kershaw, Zack Greinke and Hyun-Jin Ryu. He went 2-3, 4.74 in 9 starts for the Dodgers for a combined record of 8-11, 4.10 in 32 games, including 29 starts. He pitched 164 innings but did not play in the postseason.

On February 12, 2015, he signed a minor league contract with the Houston Astros and received an invitation to spring training. He went 3-5, 4.36 in 20 games for Houston that year, including 11 starts, logging 84 2/3 innings. 2016 proved to be his final season in the big leagues, as he made two starts for the Atlanta Braves, winning one and losing the other, with an ERA of 8.00 in 9 innings.