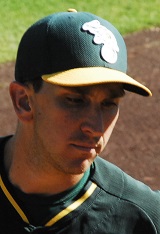 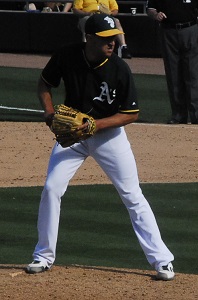 In 2015, Pat Venditte became the first ambidextrous pitcher in the major leagues in 20 years. He is one of very few to truly throw with both hands, rather than just occasionally as most ambidextrous hurlers have done.

A natural right-hander, Venditte threw with both arms since he was a child, and his father, a baseball fanatic, encouraged it, even building a baseball field in his backyard, complete with artificial turf and lights, to be able to practice with his son every day. His father figured out rightly that being ambidextrous would make his son stand out and give him opportunities that similarly talented youngsters might never have.

After attending Creighton University, Pat was selected by the New York Yankees in the 20th round of the 2008 amateur draft and made his pro debut that summer with the Staten Island Yankees. With Staten Island, he allowed just 3 earned runs in 30 appearances, posting a 0.83 ERA, and led the New York-Penn League with 23 saves. One of his first appearances with the team on June 19th became a "YouTube" sensation, as he was facing switch-hitter Ralph Henriquez of the Brooklyn Cyclones; the two engaged in a bizarre routine, with Henriquez repeatedly switching sides in the batter's box and Venditte moving his glove from one hand top the other. There was no explicit rule to handle the situation (this was changed after the season) and after a seven-minute delay in which both teams' managers discussed with the confused umpires and Venditte threw warm-up pitches with both arms, Henriquez stepped into the box as a right-handed batter and Venditte, pitching right-handed, struck him out. Following the season, he was named MiLB.com Short-Season Relief Pitcher of the Year. He began 2009 with the Charleston Riverdogs and saved 20 games and gave up only 5 earned runs in 28 outings. He was the promoted to the Tampa Yankees, where he went 2-0 with a 2.21 ERA in 21 games. He earned an invitation to the Yankees spring training in 2010 and was used in an exhibition game against the Atlanta Braves on March 30th, giving up a run in an inning and a third. During the season, he went 4-1, 1.73 in 41 games for Tampa and gave up 2 runs in 2 innings for the AA Trenton Thunder. He was no longer his team's primary closer but did save 6 games.

Venditte was back at Trenton to start 2011, again being used as a short reliever but not as closer and pitching well enough to keep alive his dream of being the major leagues' first ambidextrous pitcher of the 21st century. He went 3-7, 3.40 in 51 games, striking out 88 batters in 90 innings while walking 31. In 2012, he pitched in AAA for the first time, with the Scranton/Wilkes-Barre Yankees, but injuries limited him to 7 games. 2013 was another frustrating year, as he spent a lot of time on rehabilitation assignments, including with both Yankees affiliates in the Gulf Coast League. He was finally back in full health in 2014, but had to start the year back in AA, with Trenton. He dominated opponents there, with an ERA of 0.82 in 15 games, and returned to AAA with Scranton/Wilkes-Barre in late May. He pitched 26 times in AAA and did well, with a record of 2-5 but a 3.36 ERA. Between the two stops, he struck out 83 batters in 78 1/3 innings. After the season, he became a free agent and on November 20th signed a minor league deal with the Oakland Athletics. 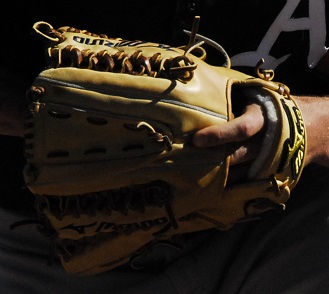 When he attended spring training with the A's in 2015, there was another flurry of articles about him, because his success in the minors meant that Oakland, which had long been known as an organization open to try new things, would give him a real shot at making it to the majors. The question was whether his unusual ability was enough to compensate for a fastball that tops out in the mid-80's. He was sent to the AAA Nashville Sounds to begin the season and was dominant, going 1-0, 1.36 in 17 games, allowing only 19 hits in 33 innings. On June 5th, he was called up to the major leagues and made his debut the same day, facing the Boston Red Sox at Fenway Park. When he stepped on the mound mound as a reliever in the 7th inning, he became the first ambidextrous pitcher of the 21st century in the major leagues, and the first since Greg Harris had done so in his final major league game in 1995. He first faced Brock Holt as a lefthander, getting him to ground out to first base. He then switched to the right hand to face Hanley Ramirez, who singled, and then Mike Napoli, who grounded into an inning-ending double play. He followed that with a perfect 8th inning, with the last out, Blake Swihart, coming courtesy of his first big league strikeout. After only four appearances, in which he allowed no runs on one hit, he was placed on the disabled list on June 12th with a strained right shoulder. When he was healthy, he went back to Nashville for a spell, then was called up again on August 15th. In his first game back, however, he allowed Chris Davis's second homer of the game with two outs in the bottom of the 9th to be tagged with a 4-3 loss to the Baltimore Orioles. He earned his first big league win on August 30th when he pitched two scoreless innings against the Arizona Diamondbacks and the A's won, 7-4, in 11 innings. He ended the year with a record of 2-2, 4.40 in 26 games. He was placed on waivers after the season and claimed by the Toronto Blue Jays on October 19th.

Pat pitched only 8 times with Toronto in 2016 with no decisions and a 5.19 ERA, He spent most of his time with the AAA Buffalo Bisons, where he was 2-1, 4.37 in 25 games. On August 6th, he was traded to the Seattle Mariners for a player to be named later. In 7 games for Seattle, he had no decisions and a 6.08 ERA. He also went 1-0, 1.08 in 5 games for the AAA Tacoma Rainiers. He moved to the Philadelphia Phillies for 2017 but spent the entire season in the minors, with the AAA Lehigh Valley IronPigs. In 52 games, he went 9-5, 3.36 with 2 saves. Moving again after th season, he signed with the Los Angeles Dodgers for 2018. He put up very solid numbers with the Oklahoma City Dodgers: 4-2, 1.75 in 45 games, with 4 saves. He also did well in a return to the majors, with no decisions but a 2.57 ERA in 15 games and 14 innings. He was not on the postseason roster. Following that good year, he was able to sign a major league contract with the San Francisco Giants on December 22nd, making it likely he would be back in the majors again in 2019.

Pat spent most of 2019 in the minors, pitching successfully in the PCL, and appeared in two games with the Giants. In 2020 he was in three games with the Marlins.

Venditte uses a six-fingered glove with two thumbs. In 2008, the Professional Baseball Umpire Corporation created a new rule pertaining to ambidextrous pitchers stating that a "pitcher must visually indicate to the umpire, batter and runner(s) which way he will begin pitching to the batter" because of Venditte. This was then added to the official baseball rules the following off-season as rule 8.01.