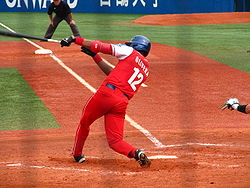 Héctor Olivera was one of the top infielders in Cuban baseball and made his national team debut in 2007. His father, Héctor Olivera Sr., had also been a star in Cuba and a member of the national team. He played briefly in the majors after defecting from Cuba, but his career was a complete bust in spite of a huge signing bonus, and was completely derailed by legal issues related to sexual misconduct and human trafficking.

Olivera was moved up to the "A" Cuban national team for the 2007 Baseball World Cup to replace Alexei Ramírez at second base. Olivera was injured in the game against South Korea and forced to leave early; he returned later in the tourney but was not at full health and was therefore yanked during the Gold Medal game against Team USA. He still hit .320/.433/.480 with 7 runs in 8 games and scoreless defense at second base; Rudy Reyes filled in while he was hurt.

Olivera took a major step forward in 2007-2008. He hit .353/.467/.542 for a OPS 193 points higher than his previous best; he stole 21 bases in 22 tries after going 21 for 39 in steal attempts the prior three years. He drew 55 walks, 20 more than in any prior campaign. His 38 extra-base hits were 16 more than in any previous season. He tied for 5th in the Serie Nacional with 25 doubles and was third in steals behind teammates Ruíz and Alexei Bell. He again scored the winning run in the finals; this time, he reached on a fielder's choice, stole second and came home on a hit by Bell. Olivera also set a playoff record with 22 runs. Olivera was named to the Serie Nacional All-Star team at second base.

Olivera hit .353/.353/.588 with 5 runs in 7 games in the 2008 Olympics, easily outhitting starting 2B Yulieski Gourriel. Due to Gourriel's presence at second, though, Olivera wound up seeing most of his time at first base, where he unseated Alexander Mayeta; the move was an odd one as Gourriel was normally a third baseman and was a more realistic candidate to be moved to first - as it was, both Olivera and Gourriel played out of position. He tripled in one run and scored another to start Cuba's offensive against USA in their semifinal win. In the 9th inning of the Gold Medal game, with a 3-2 deficit, he led off with a single against Hyun-jin Ryu but was stranded on third as Cuba settled for Silver.

In 2008-2009, Olivera batted .346/.444/.590 with 84 runs in 84 games. He was third in the league in runs behind Ramón Tamayo and Yoilán Cerce and lost out All-Star honors at 2B to Cerce. His 196 total bases were 8th in the circuit. He hit .409/.460/.568 in the 2009 Baseball World Cup and was named the All-Star second baseman, joining Justin Smoak, Hainley Statia and Shawn Bowman on the infield. He was second on Cuba in average and OBP, trailing only Alfredo Despaigne. Olivera struggled in the 10-5 Gold Medal game loss to Team USA, going 1 for 5 and making two errors.

Olivera hit .322/.415/.565 with 34 doubles and 76 runs in 89 games for Santiago de Cuba in 2009-2010. He was second in the league in doubles (behind Despaigne) and 6th in total bases (195). He lost All-Star honors to veteran Danel Castro. In the 2010 Pan American Games Qualifying Tournament, he helped Cuba win the Silver Medal; in the semifinals, he scored the winning run against Venezuela in the bottom of the 9th. He then batted .516/.531/.806 with 5 doubles and 10 runs in 8 games in the 2010 Intercontinental Cup to give Cuba its first Gold since the 2007 Pan American Games. He was just 0 for 4 in the 4-1 Gold Medal game win over the Netherlands. He was named the All-Star second baseman, joining Curt Smith, Didi Gregorius and Yulieski Gourriel on the infield and won tournament MVP honors.

Olivera defected from Cuba to the Dominican Republic in September of 2014. At 30, he was older than the usual Cuban player trying to make it to the United States, and he had a recent history of health concerns, including blood clots, but given his level of production when healthy, there were reports of at least four teams interested in offering him a long-term contract when he was given permission to work out for major league teams in March of 2015. On March 24th, he signed a six-year contract worth $62.5 million with the Los Angeles Dodgers, the fourth in a series of high profile signings of Cuban defectors by the Dodgers, following those of Yasiel Puig, Alex Guerrero and Erisbel Arruebarrena. There was no room for Héctor on the Dodgers' major league roster, and in any case he had to work himself back into shape after missing a whole season. He began the year in extended spring training, then played 6 games with the AA Tulsa Drillers, starting on June 4th, before getting a promotion to the AAA Oklahoma City Dodgers. Hitting did not seem to be a problem, as he hit .318 for Tulsa and .387 for Oklahoma City, but health was. He went on the disabled list with a pulled hamstring on June 20th, then spent a week with the AZL Dodgers, where he hit .313, before heading back to the DL. On July 30th, the Dodgers traded him to the Atlanta Braves along with P Paco Rodriguez, who was also injured, and prospect Zachary Bird, in return for major leaguers Bronson Arroyo, Luis Avilan, Jim Johnson and Alex Wood and minor league IF Jose Peraza. Salary considerations, especially the large amounts owed to Héctor and to Arroyo, were big factors in the deal, which at least promised that he would be getting a shot to play at the major league level in the near future. For their part, the Braves were the other team in the running to sign Hector earlier that year and considered that he had the potential to be an All-Star in the majors, hence the willingness to give up significant talent to acquire him. With the Gwinnett Braves, he hit .231 with no home run in 10 games and 39 at-bats.

Olivera made his major league debut with the Braves on September 1, 2015, starting at third base against the Miami Marlins. He went 0 for 4 with a strikeout. His first big league hit came the next day, a two-run single off Adam Conley of the Marlins. He ended up hitting .253 in 24 games, with 2 homers and 11 RBIs. All of his time in the field was at third base, where he started 21 games. However, heading into 2016, the Braves asked him to move to left field, using his time in the Puerto Rican League that winter to learn the position. He made the Braves out of spring training as the starting left fielder, but on April 13th, he was arrested in Arlington, VA after a woman complained to police that he had assaulted her at the team's hotel in suburban Washington, DC. Police stated that the woman who called them had visible bruising. Olivera was placed on paid leave by Major League Baseball for the duration of the investigation, the third player to fall afoul of the new policy on domestic violence following the cases of Aroldis Chapman and Jose Reyes. On May 26th, MLB handed out its sentence, an 82-game suspension ending on August 1st. It was by far the most severe penalty handed out since the adoption of the policy, reflecting the gravity of the facts in the case. Just as he was about to become eligible to play again, however, Olivera was traded to the San Diego Padres in return for OF Matt Kemp. It could have seemed like a sign of interest by the Padres, given Kemp was an established star having a very solid season, but the deal was strictly done for financial reasons. For all the money still due to Olivera, Kemp was owed about three times as much, and the deal was simply a way for the Padres to obtain salary relief. They had no plan to use him in a game: as soon as he was eligible to come off the restricted list on August 2nd, he was designated for assignment. No team was willing to pick up the remainder of his contract, so on August 10th, he was placed on waivers for the purpose of handing him his unconditional release, with the Padres swallowing up the remainder of his salary. On September 8th, the Arlington, VA District Court found him guilty of misdemeanor assault and sentenced him to a 90-day jail sentence, although 80 of those days were suspended.

While this was going on, allegations surfaced about unsavory dealings around his defection from Cuba. Olivera alleged that he was forced to sign an exclusive representation deal with scout Rudy Santin, who was not an accredited player agent at the time, when he arrived in the Dominican Republic, for a cost well above that of a typical player agent contract (he had to promise 37.5% of future earnings, while the industry average is around 5%). As he was about to sign a contract with the Dodgers, he switched agents, hiring Greg Genske, who reaped the rewards of the outsize contract he was offered. Santin alleged that Olivera was completely out of shape when he arrived and uninterested in working out, and that he and his associates had to do a tremendous amount of work just to get him in a position to be considered by a major league team, but that all this went unrewarded because Genske bribed Olivera to switch agents. The whole matter was under investigation by the FBI under human trafficking laws and was still unresolved when Santin passed away in May 2020.